Viðareiði is the northernmost town in the Faroe Islands. Hike to the top of Villingadalsfjall for great views of Viðareiði and the cone-shaped Malinsfjall mountain.

The Faroe Islands is a great hiking destination with plenty of trails to pick and choose from. It’s mostly shorter hikes and not so many multi-day treks, which I think is perfect. You can do two or three short hikes in a day carrying a light pack.

The Villingadalsfjall hike starts in Viðareiði, a beautifully situated village in the northeast of the Faroe Islands. It’s a challenging walk to the top of a mountain, but you can cut it short and still have a rewarding hike. The hike is a good reason for making the drive to this remote corner of the islands. 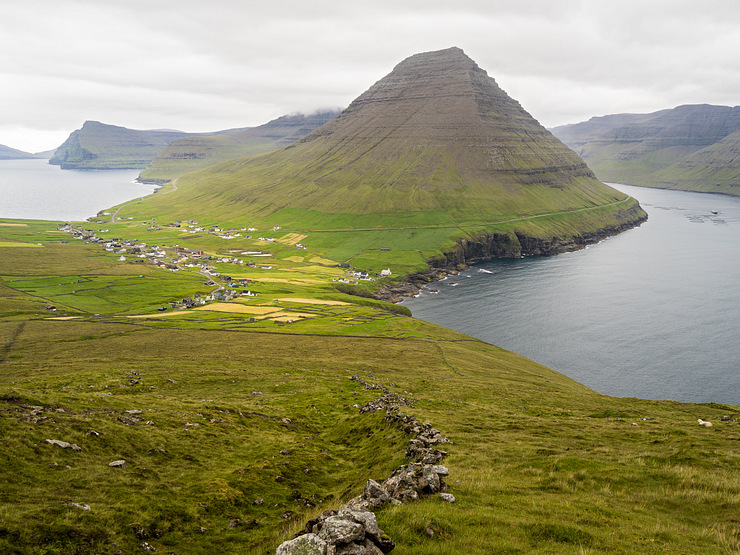 Welcome to the north

It’s all about the north. Viðareiði on the island of Viðoy is the northernmost settlement in the Faroe Islands. Viðoy stretches furthest to the north of all the islands in the Faroese archipelago. Viðareiði is as far to the north you can drive with a car and it is one of two towns on Viðoy, Hvannasund is the other.

Villingadalsfjall is the most northerly mountain and the Cape Enniberg sea cliff is the northernmost point in the Faroe Islands. 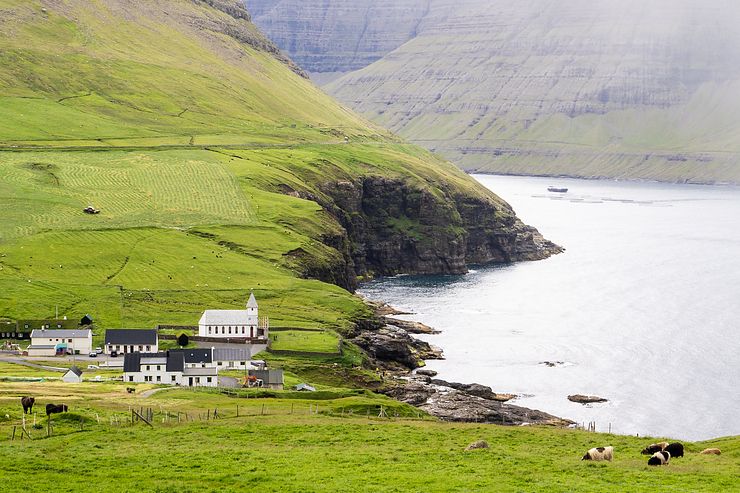 The church at the west end of Viðareiði.

Viðareiði is an old settlement established in the 14th century or perhaps even earlier. About 350 persons live in the town today. That’s a fairly large village in the Faroe Islands considering there are only like a dozen towns with a population of over 1000. 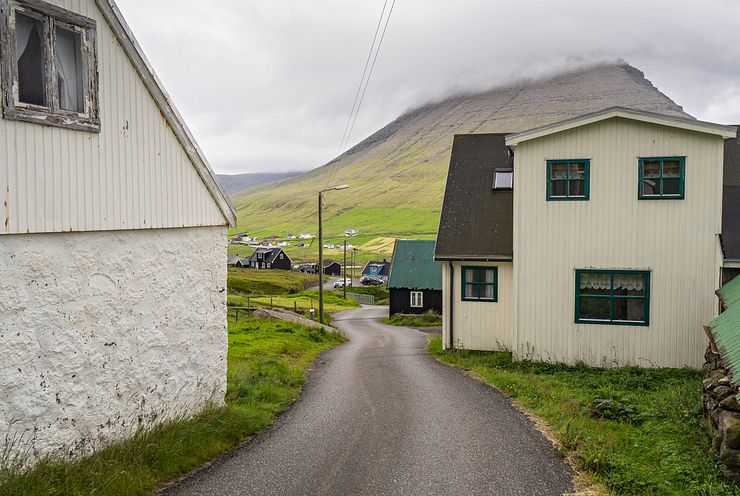 Looking back on the road to the start of the hike.

The village lies on an isthmus of land set between two mountains. North of the village is Villingadalsfjall (841m, 2759ft), the third highest mountain in the Faroe Islands. To the south lies Malinsfjall (750m, 2461ft), a beautiful cone-shaped mountain.

When you visit Viðareiði, don’t miss stopping by the church in the west end of town, close to the rocky seashore. The current church dates back to 1892, but there has been a church at this location for centuries.

The prominent location near the Atlantic Ocean proved risky in the late 17th century. A fierce storm damaged the church and the water masses washed away part of the graveyard. Several coffins slid into the stormy sea and drifted south to Hvannasund before they were salvaged and taken back to Viðareiði for reburial. At least that is what the tradition says.

Good to know for visitors is that there is a public toilet next to the church. 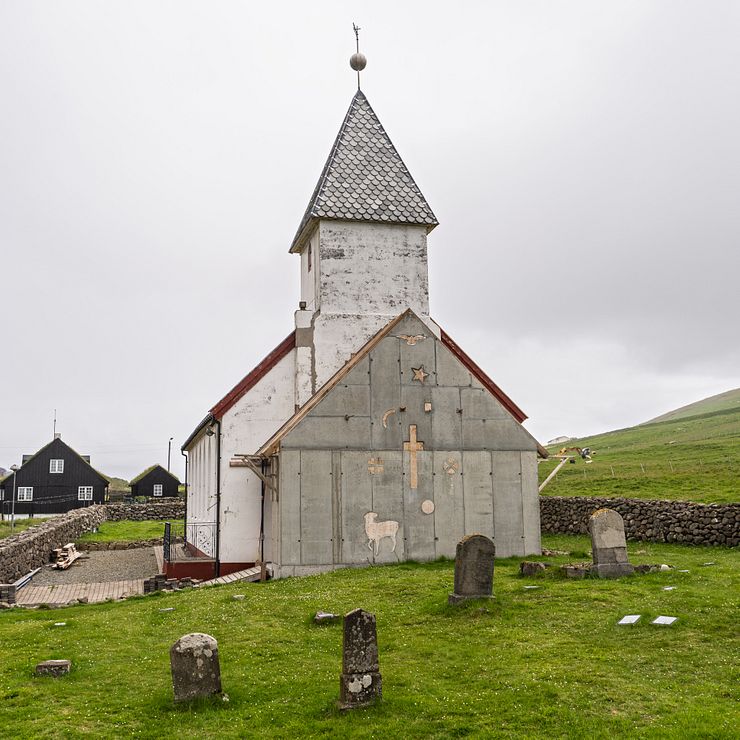 The Viðareiði church (under renovation).

The most popular hike in the area goes from the village to the peak of Villingadalsfjall. At the top, you have a superb view of Viðareiði and the cone-shaped Malinsfjall.

To the west are Borðoy and Kunoy, two islands with spectacular mountains and sea cliffs. Even further west is Kalsoy with the Trøllanes village. On the north side of Villingadalsfjall you have a view of Villingadalur. 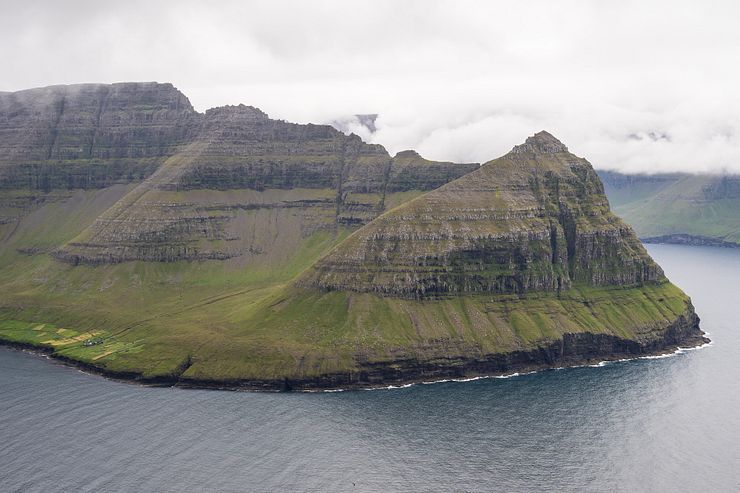 The northern tip of Borðoy.

Another hike continues past Villingadalsfjall to the northernmost point of the island, Cape Enniberg. The mighty sea cliff is 754m (2474ft) and one of the highest promontories in the world.

A promontory is a high point of land or rock projecting into a body of water. — Merriam-Webster

I haven’t done the hike to Enniberg, but I can imagine that standing at the edge of the cliff must be breathtaking. The Hiking in the Faroe Islands guide recommends doing the Enniberg hike with a local guide as the location is difficult to access and it is easy to get lost if the weather turns bad.

Both hikes follow the same trail and you can make a detour from the path to Enniberg to see the view from the top of Villingadalsfjall before continuing to the sea cliff.

The hike to the top of Villingadalsfjall is about 2.5–3km one-way (1.55–1.86 miles). It takes 3–4h (return) and it’s tougher than most of the other popular hikes in the Faroe Islands. From the start of the hike to the peak, the vertical ascent is about 750m (2461ft). You walk the same way back when returning to the village.

If you’re not a fan of walking uphill, you’ll be happy to know that you get a good view even without walking all the way to the top. The view of Viðareiði and Malinsfjall gets better and better as you work your way up the mountain.

Viðoy means wood island, which is odd as no trees grow there. The name relates to the driftwood floating in from Siberia and North America. — Wikipedia

I never made it to the top, it was no point in continuing because of the clouds covering the peak. If you walk 45-60 minutes (very individual of course) on the path from the start of the hike, you will have a nice view to the south and to the west. It’s not as good as the panorama from the top, but I think it comes close.

It was cloudy when I visited, but I think you can see the peak from the parking on a clear day. The path runs diagonally along the lower half of the mountain and then straight up towards the top. 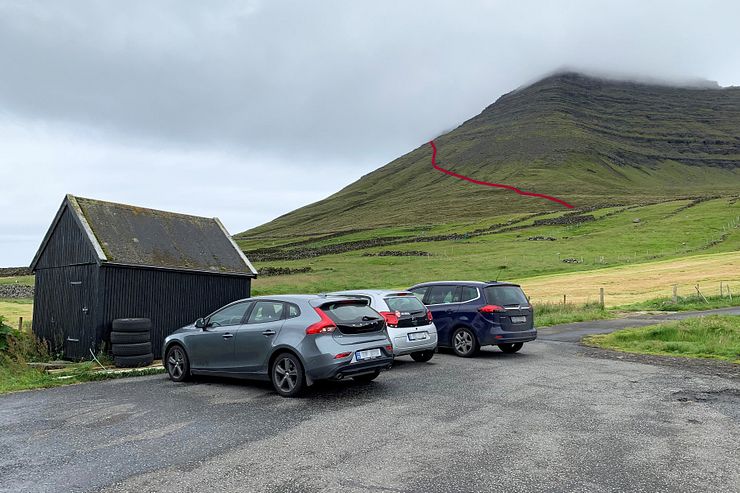 The start of the hike at the end of the road.

Before passing through a gate to the outfield, you must pay a hiking fee. The trail passes across private property and the landowner charges DKK 200 for the hike (August 2019). The easiest is to pay by putting cash into a mailbox at the gate. If you don’t carry cash, you can pay later by making a bank transfer.

The path is marked with blue plastic tubes stuck into the ground. The first half of the trail is grassy and on this day it was wet, muddy and slippery. It’s not that steep in the beginning and footsteps in the dirt created by all the hikers stepping here in the past make the walk easier. So far so good. 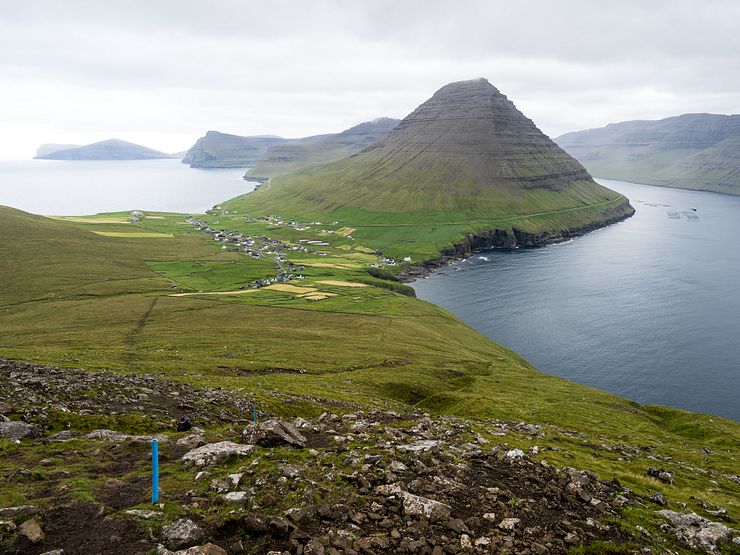 The hiking path is marked with blue plastic tubes.

After a while, it gets rocky. The terrain shifts from grass to rocks, boulders and small cliffs. From now on it gets tiring and boring. It’s steep and I have to watch my steps on the slippery boulders. The view to the south is already beautiful though.

The plateau and the trail split

When it’s about 100m of vertical ascent left to the peak, the path reaches a plateau with a cairn (elevation 745m, 2444ft). The blue sticks end here and the path splits. A line of cairns branches off to the left (northwest), this is the way to Cape Enniberg. To continue to the top of Villingadalsfjall, follow the instructions in the excerpt from the hiking guide below.

"You should not follow the cairns (to Enniberg). Instead, continue to climb in the same line as before. In some places there are small cairns, but after a few minutes you will see a cairn with a rod that marks Torratindur, which is at the top of Villingadalsfjall". — Hiking in the Faroe Islands

I turned around before reaching the plateau. I talked to some hikers on their way down and they said the view didn’t get that much better higher up. With the clouds now flowing down the mountain, the view would anyway disappear soon.

I called it a day about 2-300 vertical meters below the top. It’s always annoying to abort a hike, but I was rather happy with the view already and I was running late. I planned to hike Slættaratindur, the highest mountain in the Faroe Islands, in the afternoon. 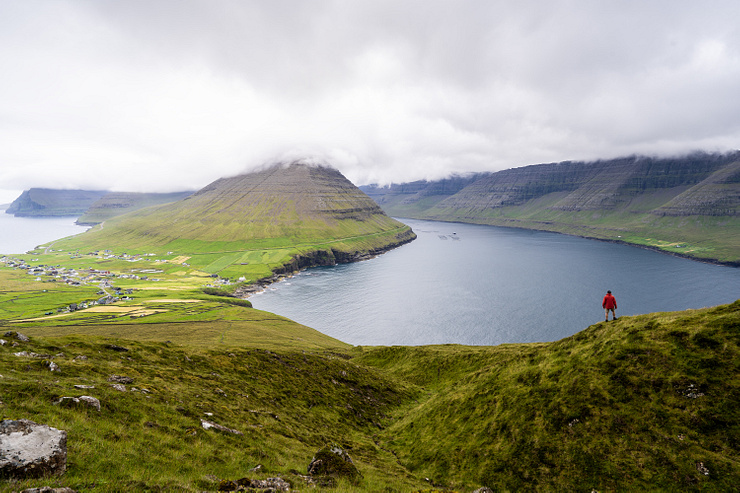 There are two ditches west of the grassy path.

Before returning to the village I sat down to admire the landscape and have my lunch. I waited almost an hour to see if the clouds would clear, but it got worse and a light rain came and went. Clouds swept in and covered the top of Malinsfjall on the other side of the village.

I was not the only one to skip the last part of the hike this day. A handful of other hikers also turned around at the same point. The weather wasn’t on my side, but all in all it was a nice hike. With clear weather, I’m sure it must be awesome.

How to get to Viðareiði

Viðareiði is literally at the end of the road, but distances are short in the Faroe Islands and it’s only a 1.5h drive from Tórshavn. From Klaksvík, which you pass on the way from Tórshavn, it’s just 25 minutes. A causeway at Hvannasund connects Viðoy with the island of Borðoy.

The road is good and the only thing to be aware of is the two dark single-lane tunnels on Borðoy, Árnafjarðartunnilin (1680m, 5510ft) and Hvannasundstunnilin (2120m, 6960ft). With a short road section between them, the tunnels cross through the mountains to the other side of Borðoy. 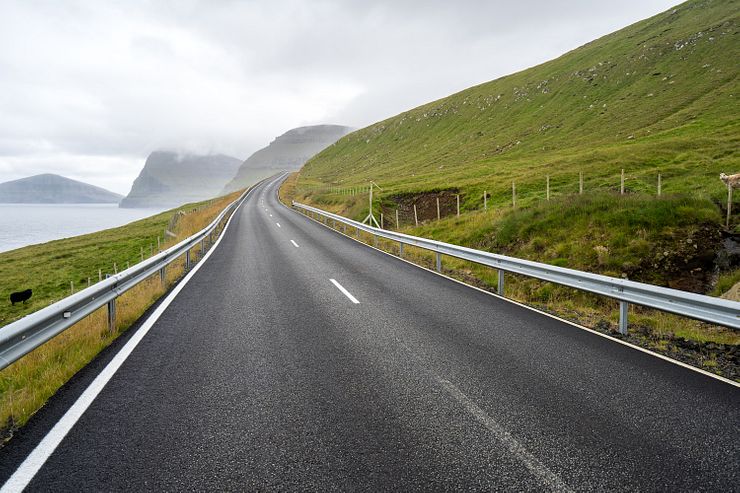 The road outside Viðareiði on the east side of Viðoy.

If this is your first time driving through a single-lane tunnel, this guide has good information. The single-lane tunnels have turnouts every 100m (328ft). When you have the turnouts to the right, you must give way to oncoming traffic. An exception is when you meet a truck, then you should always give way. It’s easy to drive in the tunnels, just keep the headlights on and don’t drive too fast.

I didn’t make a video of the tunnel drives on Borðoy, but I have one from the Gásadalur tunnel on Vágar so you can get an idea of how it’s like. That tunnel is lit while the Borðoy tunnels are dark, but the experience is similar.

Driving through a single-lane tunnel.

Of all the single-lane tunnels I drove in the Faroe Islands, the Borðoy tunnels had the most traffic. If you have several cars in front of you when driving into a tunnel, remember to keep a proper distance to them. It’s tight to fit cars driving in a caravan into a single turnout when meeting an oncoming truck.

On Viðoy, the road from Hvannasund splits into two roads leading to Viðareiði. One road along the west shoreline and one passing through a modern double-lane tunnel to continue on the east side of the island. I think the tunnel road will replace the west road which is prone to landslides and avalanches.

Villingadalsfjall or Villingardalsfjall? Is the name of the mountain north of Viðareiði spelled with or without an 'r'? Both spellings are frequent, but I opted for the one without the 'r' after seeing it on a printed map.

If you don’t have a car, you can take the bus from Klaksvík to Viðareiði. Check the timetable for line 500 Klaksvík - Viðareiði at ssl.fo.

Klaksvík, 19km south of Viðareiði, is the starting point of two activities of which you can pick at least one to do on the same day as hiking Villingadalsfjall.

The Kallur lighthouse on Kalsoy is one of the top sights in the Faroe Islands. You must take a ferry to Kalsoy so visiting Kallur is a half-day trip. 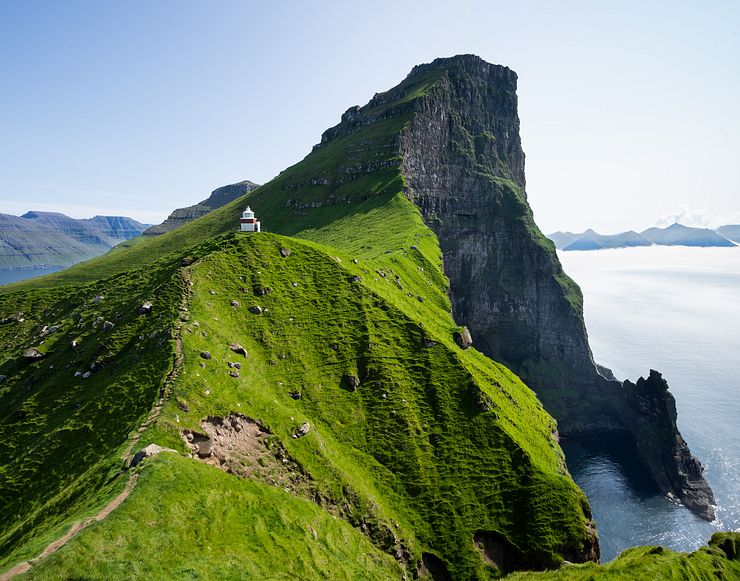 The Kallur lighthouse on Kalsoy.

A shorter activity is to hike the Klakkur mountain near Klaksvík. The hike from the parking at Hálsur to the top of Klakkur takes about 30 minutes one-way. 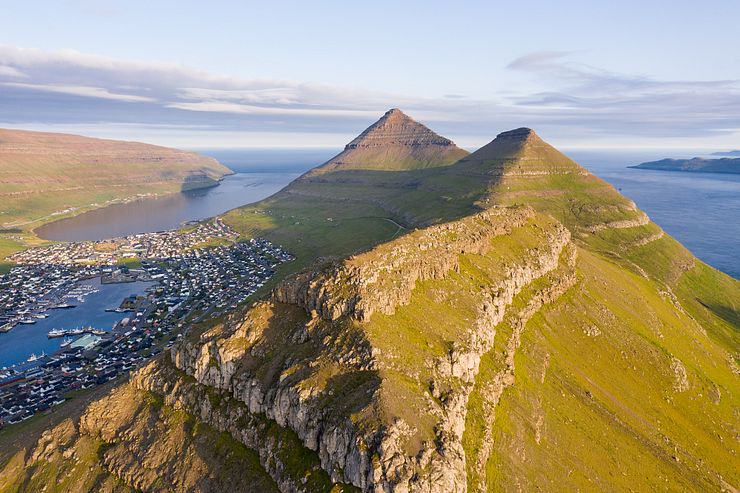