The Andalusian town Ronda is split in two by the El Tajo Gorge. The magnificent Puente Nuevo spans the gorge and this bridge alone is reason enough to visit Ronda.

Ronda is one of the oldest and most spectacular towns in the Málaga province in southern Spain. It is home to around 35.000 people and while the modern part of the town is growing, La Ciudad, the historic old town, retains its atmosphere. The magnificent bridge Puente Nuevo is the main sight of the town.

Ronda is about 100km (62mi) west of Málaga and makes a nice day trip or stop on a road trip through Andalusia. From Ronda it is a 1h drive to Caminito del Rey, another highlight in the region. 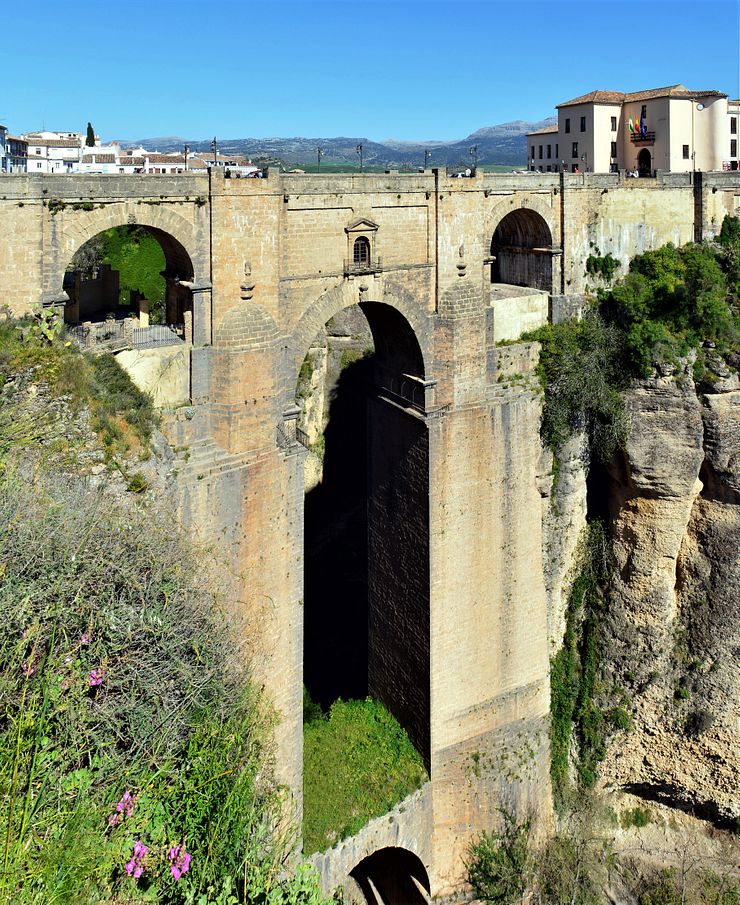 The Celts were the first settlers in the place to become Ronda. After the Celts came the Romans and the settlement, called Arunda at the time, developed into a city when Julius Caesar ruled in Rome. Close to Arunda, the Phoenicians founded the city of Acinipo. The two cities share a lot of history and they were both destroyed and pillaged.

The Byzantine Greeks discovered the ruins of the two towns and moved in. Now things become confusing as the Greeks settled in the remains of Acipino and named it Runda. The Greeks were later defeated by the Visigoths and Acipino/Runda was demolished again. Left was Arunda that prospered. The ruins of Acipino remains today known as Ronda la Vieja (Old Ronda).

In 713, the Moors conquered Ronda. It was the start of a long period of Moorish rule lasting until 1485 when the Marquis of Cádiz claimed the city. Sometime during the Moorish period, Arunda changed name to Ronda.

Serranía de Ronda and the valley

Ronda is perched on a plateau and a valley opens to the west with a view towards Serranía de Ronda (Ronda Mountain Range). I am not sure what this valley is called, maybe it is also named El Tajo as the gorge, maybe it isn’t. It doesn’t matter much, what matters is that the view to the west from Ronda is not to be missed. 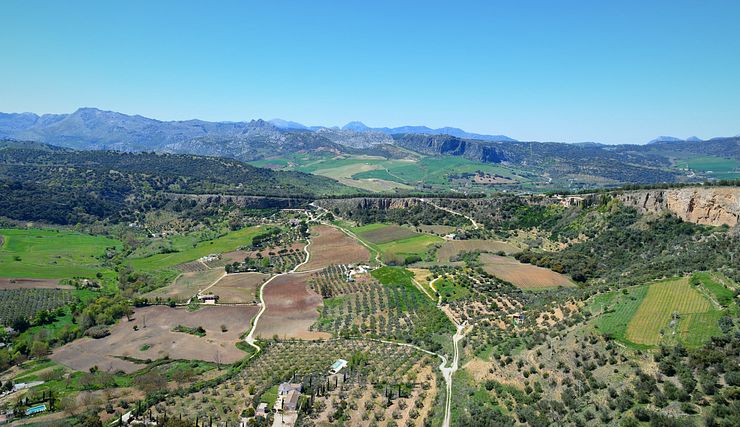 The valley and Serranía de Ronda from the terrace promenade in Ronda.

The view of the valley is best enjoyed from a series of connected terrace promenades along the precipice. You can walk from Puente Nuevo, passing the Parador hotel and continuing on Paseo Blas Infante to the park Alameda del Tajo. From the park, Paseo del los Ingleses (the English Promenade) continues north until reaching the Victoria hotel.

The Mirador de Ronda viewpoint is close the Parador hotel and it is the most visited of the balconies along the terrace promenade. 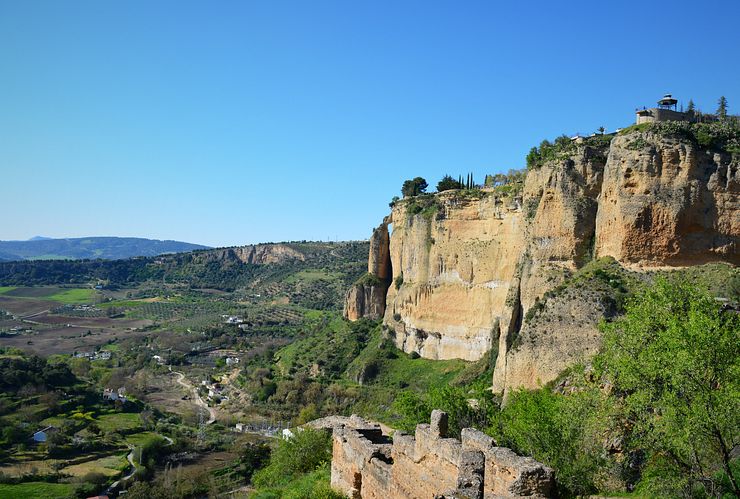 Mirador de Ronda in the upper right corner at the western precipice in Ronda.

Puente Nuevo - the star of Ronda

Ronda is split in two by the narrow El Tajo Gorge (tajo means sheer drop) with the old town on the southern side of the chasm and the new town on the northern side. The Guadalevín River flows through the 120m (394ft) deep gorge and out in the valley to the west of Ronda. There are three bridges connecting the old town with the new: Puente Viejo (Old Bridge), Puente Romano and Puente Nuevo (New Bridge).

Puente Nuevo is the biggest and the most impressing of the bridges. The bridge alone is reason enough to visit Ronda if you have the slightest interest in architecture. The first attempt to build a bridge at this spot started in 1735 using a single arch design. It was an ill-fated project ending in 1941 when the entire bridge collapsed causing the death of 50 people.

The second attempt at constructing the new bridge was carefully planned and executed. It required 34 years (1759 - 1793) to complete Puente Nuevo, and the result is astonishing. The 98m high bridge is a stunning piece of architecture.

There is a room above the central arch that has been used for various purposes during the years. It has been a prison, bar and now houses a museum dedicated to the history of the bridge. We didn’t enter the museum so I don’t know if it is worth a visit. The entrance fee is only €2, so it doesn’t cost much to check it out though.

Puente Nuevo from the gorge viewpoints

After walking on the bridge and the admiring view over the canyon from the top, you should also see Puente Nuevo from below. The best view of the bridge is from a couple viewpoints west of Ronda where the Guadalevín River exits El Tajo Gorge with a small waterfall.

There is a path leading down into the gorge from Plaza de María Auxiliadora. To find the entrance to the path, cross the bridge over to La Ciudad (Old Town) and turn right on to Calle Tenorio. Continue on the narrow street until you reach Plaza de María Auxiliadora. The entrance to the path is to the right at the other end of the plaza (coordinates 36.738170, -5.167022).

The upper part of the path is paved, but further down it turns into a dirt path. It is easy walking on the way down, but tougher to get back up if it is a hot day with a burning sun. Bring a bottle of water. 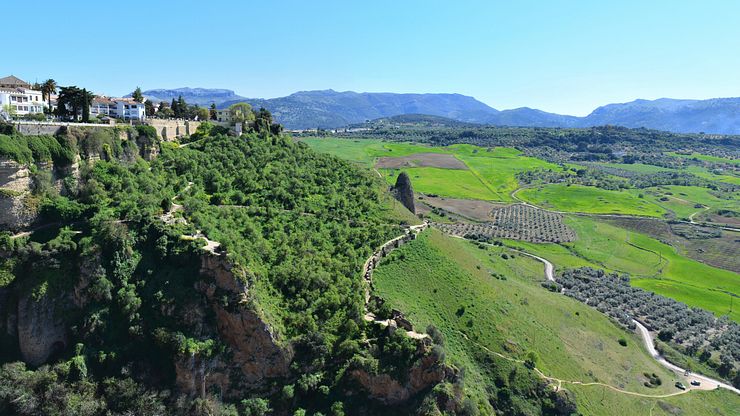 There are two viewpoints where you have a lovely view of the bridge. The first one is not so far down along the path and it is reached by taking to the right at an intersection with a path leading down to a small plateau. The viewing angle is a little better from the second viewpoint further down, but you are closer to the bridge at the first spot.

You can also continue on the side path in the direction towards Puente Nuevo to walk under the bridge and peek into El Tajo Gorge. We didn’t try that though. 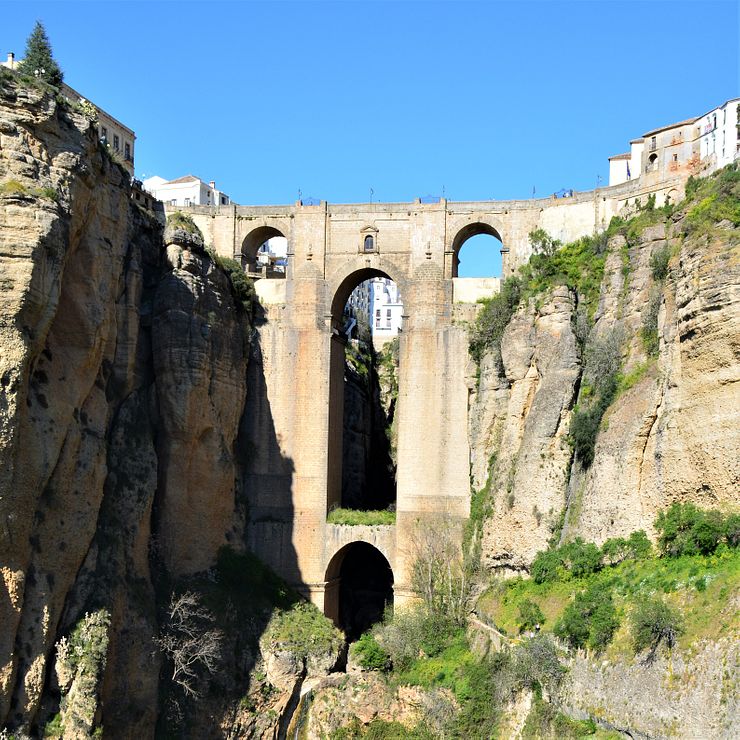 Puente Nuevo from the upper viewpoint.

To reach the second viewpoint, continue on the main path which after a while makes a sharp right turn and takes you down to a ruin. The ruin is Arco del Cristo (Arch of Christ), a gate in the old fortification walls, Murallas de Albacara. This is the classic view of Puente Nuevo and it is best to visit late in the afternoon or early evening when the sun is in the right position to make the bridge glow. We arrived at the viewpoint too early to get the best light and the sharp shadows made it tricky to get good photos. Anyway, the view is great! 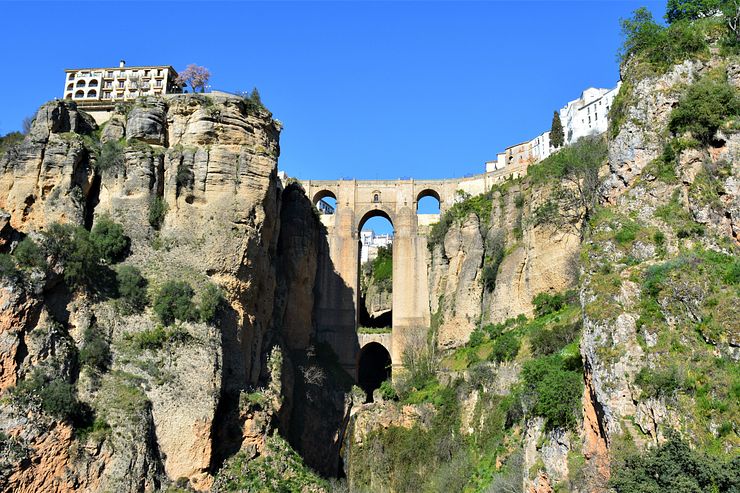 It is possible to continue on a path even further down to reach the bottom of the valley, but I don’t think the view gets any better there. If you don’t want to walk down and up the path from Plaza de María Auxiliadora, you can also drive to the valley and park there (coordinates 36.738923, -5.170316). There is a dirt path from the parking leading up to the Arco del Cristo viewpoint (see the image with the path overview).

Other sights in Ronda

There are other things to do in Ronda except gazing at the bridge and taking a stroll in the old town. Ronda is the birthplace of modern bullfighting and its bullring, Plaza de Toros, is over 200 years old. The bullring is now a museum, but is used for bullfighting once a year during the Feria Goyesca festival in honor of Pedro Romero. Romero is the creator of modern bullfighting where the matadors meet the bull on foot instead of while riding a horse.

We did not visit Plaza de Toros as we are strongly against killing animals as entertainment and while we respect the local traditions, bullfighting is nothing we want to support.

Ronda also has its share of museums and a well preserved Arabic bathhouse. We didn’t have time to visit any of them, but I don’t think they are anything special. A visit to Ronda is rewarding with just taking a walk in La Ciudad, watching Puente Nuevo from the top and the bottom and relaxing in front of the view of Serranía de Ronda.

Ronda is accessible by car, train and bus.