Njegoš Mausoleum sits at the second-highest peak of Mt Lovćen in southwestern Montenegro. Visit for the interesting history and spectacular views.

When planning the itinerary for the Montenegro part of my Balkan road trip, a series of eye-catching photos of a building at a mountain top caught my interest. The building was Njegoš Mausoleum, built on top of Jezerski vrh (1657m), the second-highest peak of Mt Lovćen in southwestern Montenegro. I have a thing for mausoleums. I have visited the final resting places of Lenin, Mao, Ho Chi Minh and Kim Il-sung, but I had never heard of Njegoš. Who was this man and what did he do to earn the honor of a mausoleum built at such a remote and scenic location? It was an easy decision, I added Mt Lovćen and the mausoleum to the itinerary.

I will tell you more about Njegoš and the history of the mausoleum, but let’s start with how to get there. I have not found any information about public transportation to the site. You can join an organized tour, hire a private driver or get a car and drive there yourself. Mt Lovćen is also a national park with trails for both hiking and mountain biking. The highest peak of the mountain is Štirovnik (1749m).

The park is accessible by car from Kotor in the west and from Cetinje in the east. I started the day in Kotor and crossed the mountain from west to east. Leave Kotor on road E65/E80 and turn right on to P22 which you follow until the start of road P1. The P1 back road is a real gem as it winds up the steep slope of Mt Lovćen. It is a narrow road with sheer drops and sharp bends. The most fun, or hair-raising depending on how you see it, part of the road is Kotor Serpentine. It is a stretch of about 8 kilometers with 16 hairpin turns. The higher you climb the better the view over the Bay of Kotor becomes. There are several pullouts where you can stop to admire the breathtaking view and take photos. 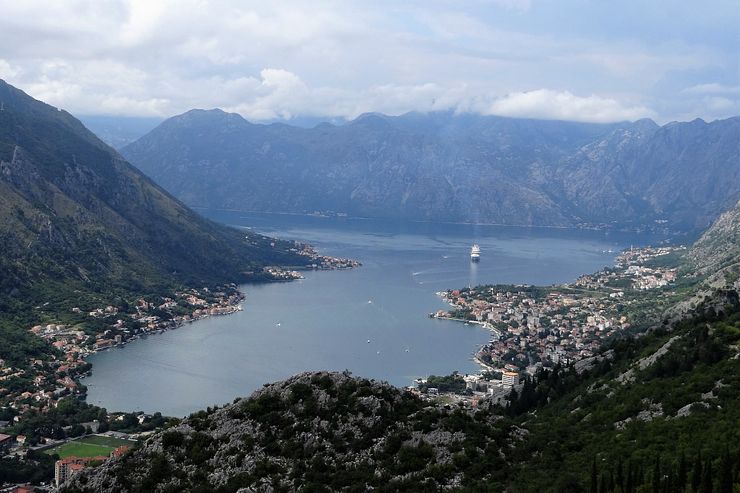 View over the Bay of Kotor from the P1 road.

There are reports describing this road as dangerous and horrible to drive. I don’t agree with that, maybe it was before, but when I drove it in 2014, the road was in good condition and it has protective barriers. Yes, it is narrow and if you meet a tour bus it is tight, but the passing places are not that far between. I recommend taking this scenic road; it is well worth the drive.

You can use the street view in Google Maps to see the whole P1 road. Here is also a link to a short video from my drive of the road just to show the road condition. It was made using a handheld camera, so it is a bit shaky.

The P1 road from Kotor to Mt Lovćen national park.

With the serpentines done, you arrive at a crossing after 3-4 kilometers. Here you have a choice. You can either continue straight and stay on P1 or you can turn right on a smaller road. If you stay on P1, you will follow the road around the mountain until you reach Cetinje and approach the mausoleum from the east. The road is still narrow but in good condition and you will pass through the village of Njeguši, the birth place of Njegoš.

I turned right at the crossing onto the rougher road as I wanted to pass through the heart of the national park. A word of warning, if you didn’t feel comfortable driving the serpentines on P1, then you should not take this road. It is narrow, in a worse condition than P1 and unprotected for long stretches. The road has nice views but nothing that spectacular as I remember it. Perhaps I missed some of the best parts because I was driving through mist and clouds.

The back road through Mt Lovćen national park.

After driving through the national park for about 9 kilometers you reach an intersection with a bigger road. This is the road from Cetinje and it will take you all the way to the mausoleum.

The mausoleum has a parking, but it is quite small. If it is full, you can just park the car at the side of the road and walk back to the mausoleum. In general, I found parking problematic on Balkan. During high season you will have to be patient and look around for a free space at popular attractions.

Njegoš full name was Petar II Petrović-Njegoš and he lived between 1813 - 1851. He is one of the most important poets and philosophers in Montenegrin and Serbian literature history. The epic poem Gorski vijenac (The mountain wreath), published in 1847 is his most famous work. Njegoš was not only a poet, he was also vladika, Prince-Bishop of Montenegro. Following the death of his uncle Petar I in 1830, Njegoš became the spiritual and political leader of the country. As a ruler, he strived to unite the tribes of Montenegro and to establish a centralized state.

The region has a complicated political and religious history and knowing something about it gives a different experience when traveling through the countries here. 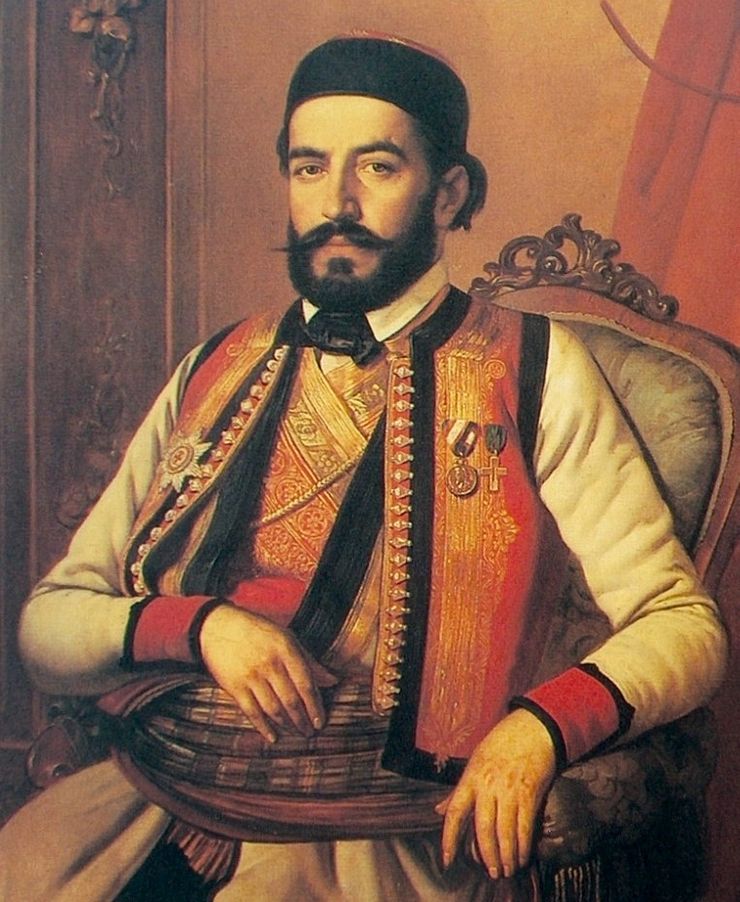 In 1851, Njegoš caught tuberculosis, and he died in Cetinje the same year. He was first buried at the Cetinje monastery, but the church moved the remains to a small chapel on top of Mt Lovćen in 1855. This was Njegoš own will, and he had himself designed the chapel dedicated to his predecessor. The chapel was built in 1845 in Byzantine style.

During World War I, the remains had to be temporarily moved back to Cetinje. Austria-Hungary occupied Montenegro and the intruders erected a monument to Austrian Emperor Franz Joseph on Mt Lovćen. The chapel was damaged during the war and work started on a plan to replace it with a mausoleum. This never happened for economic reasons and the original chapel was restored in 1925.

The chapel survived World War II, but in 1952, the communist authorities in Yugoslavia decided to replace the chapel with a mausoleum. Time passed, but the old chapel was finally demolished in the late 1960s. Technical preparations finished in 1970 and construction of the mausoleum started in 1971. Work completed in 1974 when the mausoleum was inaugurated. The site was renovated in 2013 to the state it has today.

The admission fee to the mausoleum is cheap, only 3 euro (half price for students) in 2018. Be sure to check their website (link) for opening hours before visiting. To reach the entrance you ascend 461 steps on a long staircase that goes through a tunnel in the mountain. 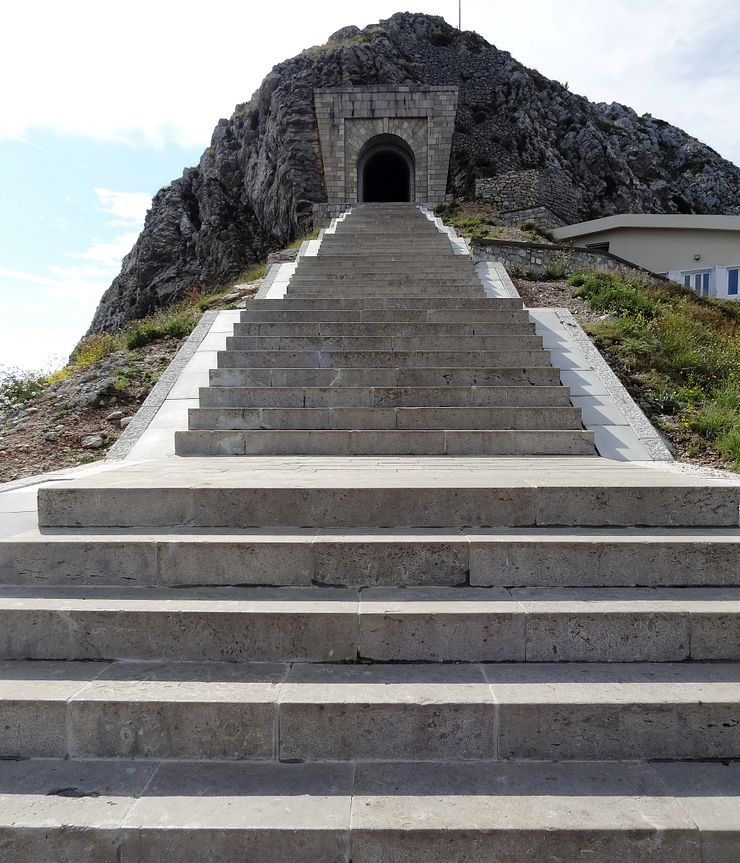 Take a break at the tunnel entrance and look back over the parking and rest your eyes on the pleasant view before continuing the climb. 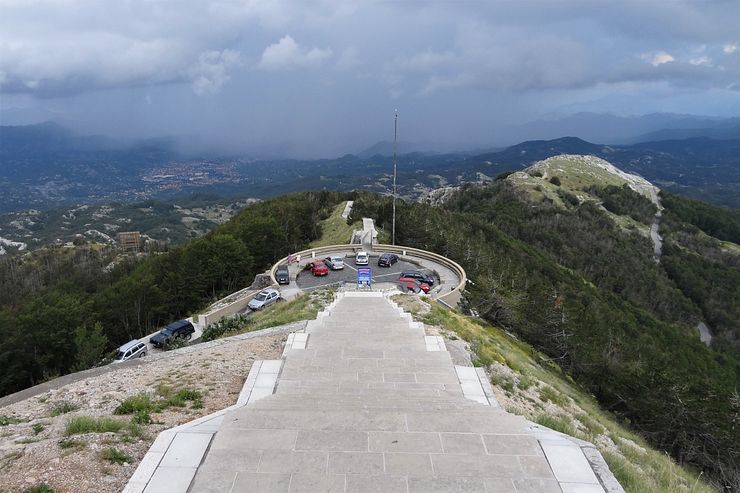 After exiting the tunnel you see the mausoleum where it sits on the mountain top. 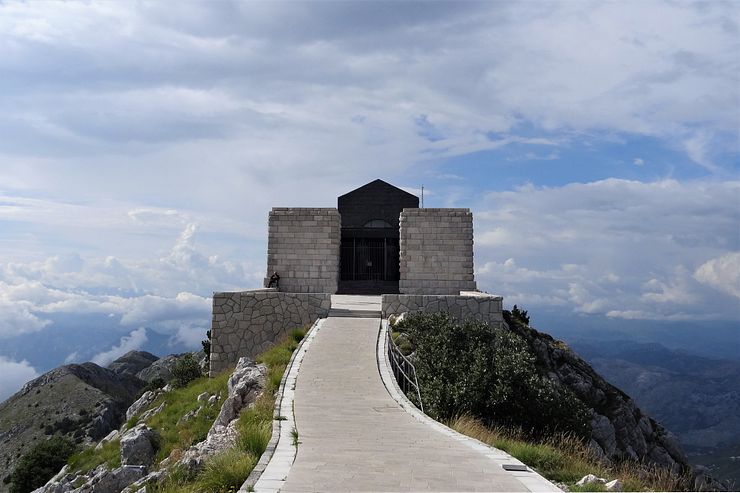 The front of Njegoš Mausoleum.

The entrance to the tomb is guarded by a pair of impressing statues. It is difficult to see in the photo as there is no good reference point, but the statues are around 4m tall. 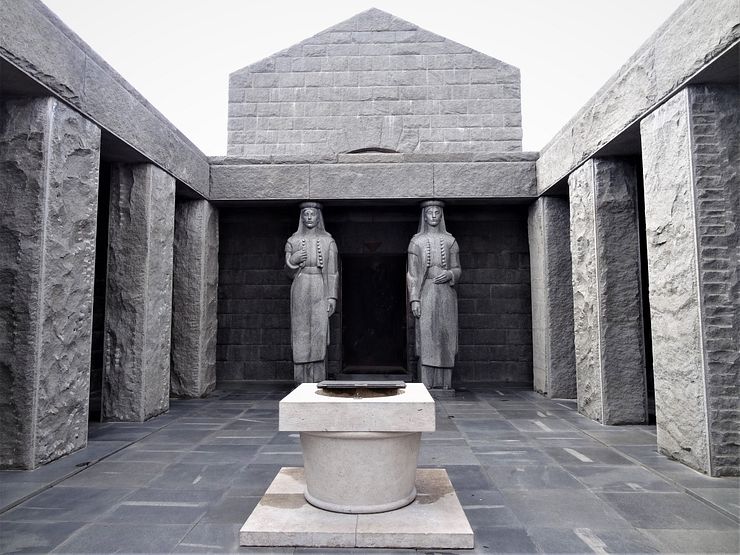 The massive statue of Petar II Petrović-Njegoš stands under a golden mosaiq inside the mausoleum. The statue was carved from a single block of black granite by famous sculptor Ivan Meštrović who also designed the mausoleum. The tomb with the remains of Njegoš is below the statue. 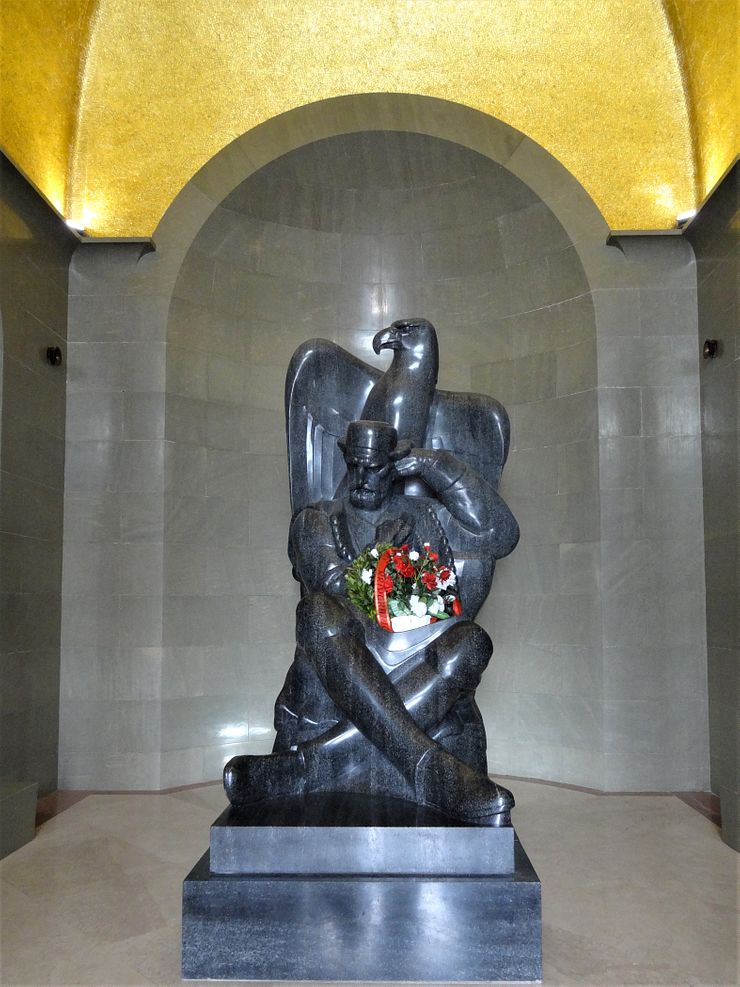 The statue is imposing and it shows Njegoš as a philosopher rather than a ruler, at least in my eyes. 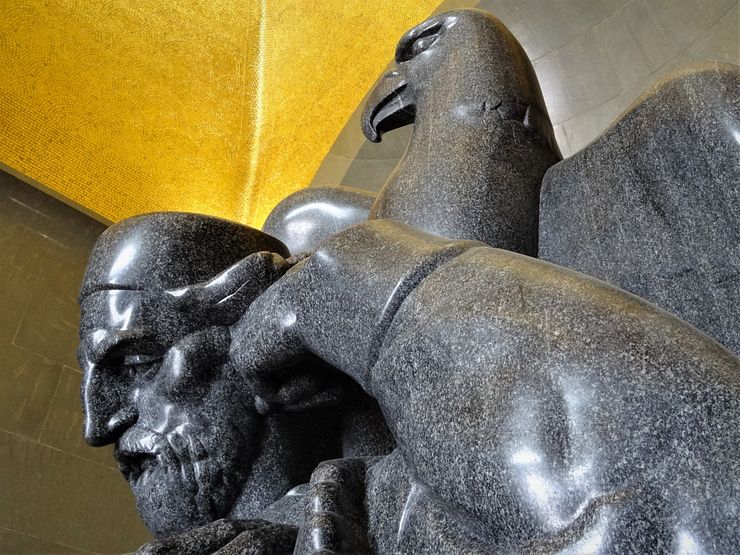 After visiting the mausoleum, you can continue along the mountain ridge on a path behind the building. 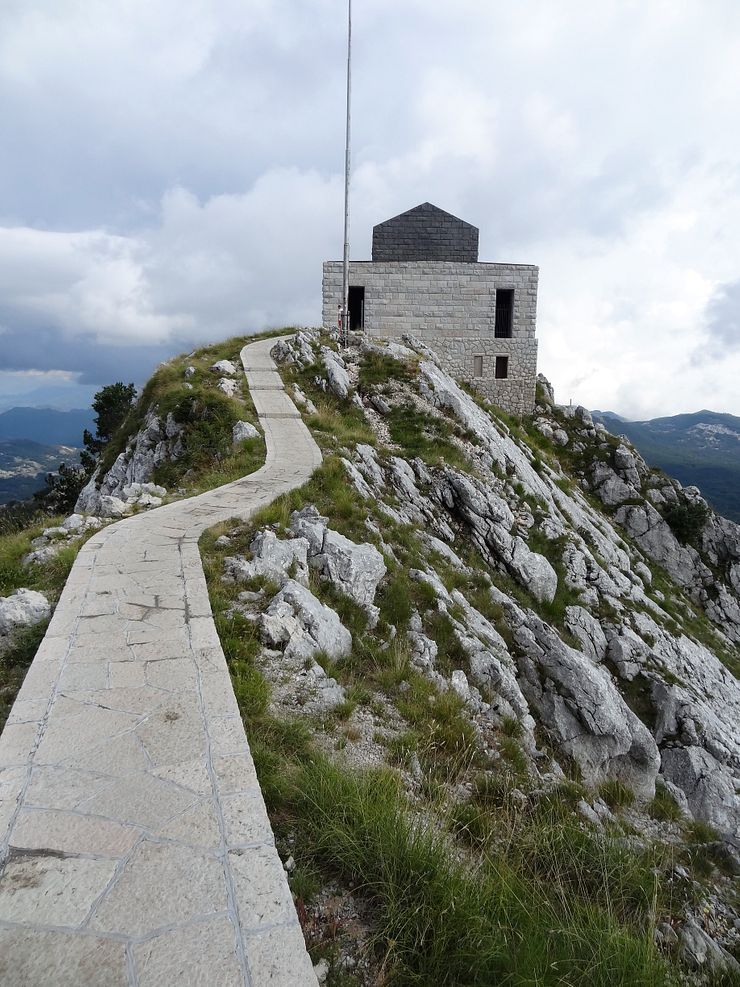 The back of Njegoš Mausoleum.

The path leads to a circular platform from which you get a fantastic view over the surrounding landscape. 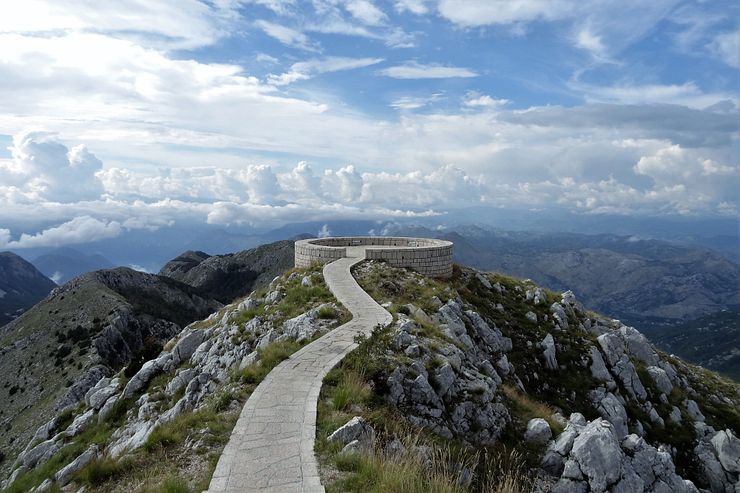