You don't have to be a bird-watcher to enjoy the boat tour to Vestmannabjørgini, the mighty sea cliffs and grottoes north of Vestmanna.

Vestmanna is a village on Streymoy, the largest of all the Faroese islands. With a population of around 1200, Vestmanna is one of the larger villages in the Faroes. The main reason to visit Vestmanna is for joining a boat tour to Vestmannabjørgini, a 6km long range of impressing sea cliffs north of Vestmanna. 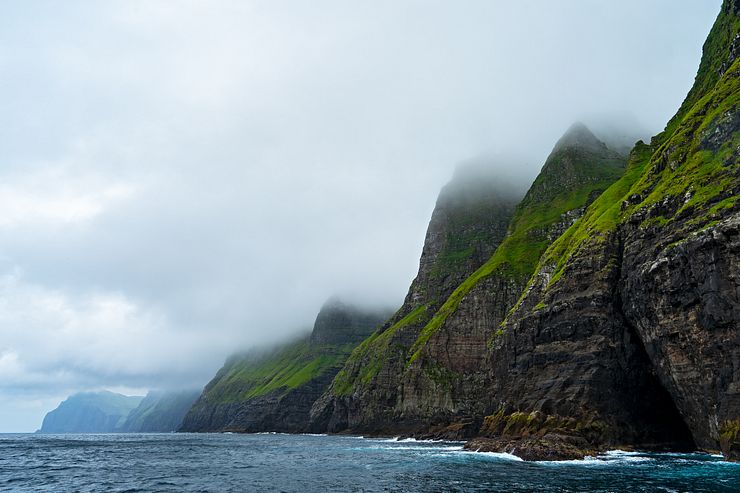 The cliffs are known for the many seabirds nesting there during the summer. You don’t have to be a bird-watcher to enjoy the tour to Vestmannabjørgini, it is the mighty cliffs with their grottoes and rock formations that make this boat ride memorable.

I would recommend doing this tour for the chance to get a different perspective on the incredible Faroese nature. The local people has a strong connection to the sea which is a fundamental part of life on the islands. Seeing and getting close to the sea cliffs from the water is a different experience compared to driving the scenic roads or hiking, which is what most people do when coming to the Faroe Islands.

For puffins - go to Mykines instead

If you want to see seabirds close, especially the adorable puffins, it is better to go to Mykines. While hiking the lighthouse trail on Mykines, you will walk just a few meters from the birds. You will not come near that kind of close encounter on the Vestmanna boat tour. You will of course see a lot of birds, but not that close. 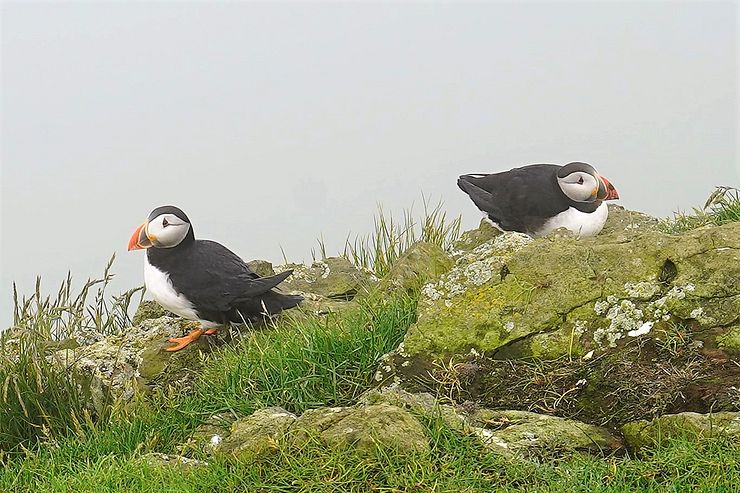 Puffins on a sea cliff on Mykines.

Why go to Vestmanna bird cliffs?

When planning the itinerary of our trip to the Faroe Islands, we didn’t include the boat tour to Vestmannabjørgini. There are so many other awesome places to visit and with limited time it is impossible to see them all.

I am not into bird-watching and favor do-it-yourself activities over organized tours, but we wanted to get out at sea. For once it turned out that one of the other activities we did required less time than planned so we could squeeze in a visit to Vestmanna. I’m happy we could do that because we had a great time at the sea cliffs.

Vestmanna is also good to combine with other places on northern Streymoy like the scenic villages of Saksun and Tjørnuvík. Fossurin í Fossá, the highest waterfall in the Faroe Islands, is maybe not that impressing, but you will pass it when driving around in the area so why not make a stop there as well?

There are several companies running tours to the sea cliffs and I think they all operate from the port in Vestmanna. We went with Skuvadal and another option is Vestmannabjørgini. The best time for the tour is from early May through August, the period with most birds nesting at the cliffs. Skuvadal has tours lasting around 2h from April to September and you can book online on their website (295 DKK 2019). 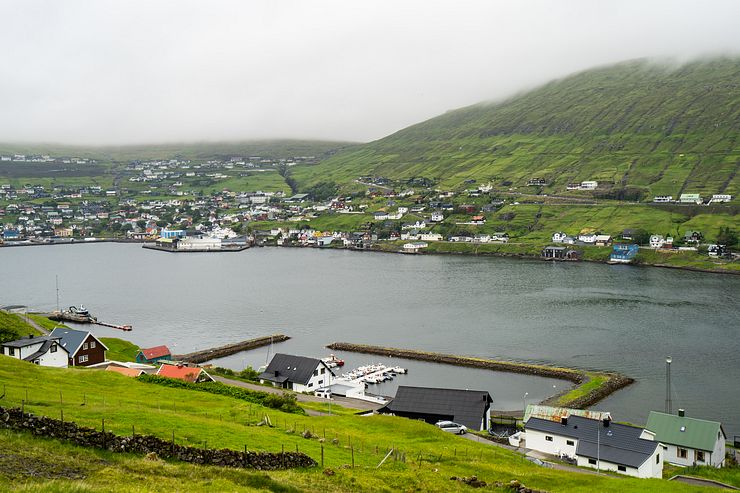 Check in at the Vestmanna Tourist Centre to get your boarding slip for the boat. The centre is in the marina just next to where the boat departs and they have a restaurant and a toilet. If you are driving, there is a parking lot in the marina, very convenient.

You can also take bus 100/300 from Tórshavn to Vestmanna, ask the driver to let you off at the tourist centre. The tours are coordinated with the bus timetable and the boat waits for the bus to arrive which usually is 5-10 minutes before the departure time.

Check the weather on the day of the tour

As always in the Faroe Islands, the weather can cause problems, particularly for a boat tour. Check the weather and status of the tour before going to Vestmanna. Sometimes they cancel the tour or take a different route. I don’t know how good the alternative route is, but one can imagine it isn’t as good as the regular one. In our case we booked on the same day the tour was departing and we called the centre first to check the weather.

Dress for cold winds and rain

The boat in use for the day was Froyur which has inside seats on the lower deck and outside seats on the upper deck. You are protected from the weather when sitting inside, but you see better on upper deck. I recommend dressing for bad weather and sit outside for the best views. Try to get a seat in the front right side to have unobstructed views of the cliffs.

Even if the weather is nice in the port when boarding the boat, don’t be surprised if it’s cold and rainy out at sea. We did the boat ride in early July on a typical Faroese summer day; it was around 14°C (57°F) and a cloudy sky. After leaving Vestmanna we had a rain falling on and off during the tour. I didn’t regret wearing a warm hat, water-resistant clothes and even a pair of gloves. There was a guy on the boat dressed in jeans and a thin jacket, he seemed to suffer in the frisky winds!

When the boat is close to the cliffs, there is a small risk for falling stones and the crew will hand out hard hats to use when that part of the tour starts. 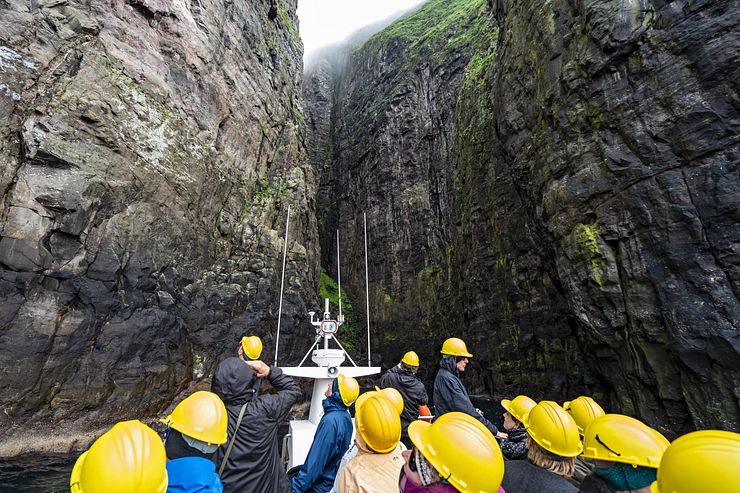 Is it a construction worker conference?

The photos in this post don’t do Vestmannabjørgini justice. It wasn’t the easiest task to capture the high cliffs from a boat in the rainy weather.

We pass through Vestmannasund on the way out to the cliffs and we are lucky, today is a big rowing contest in Vestmanna. Kappróður is the local term for the sport and it is also the national sport of the Faroe Islands. Almost every village has at least one rowing team. The traditional Faroese boats resemble miniature Viking longships.

Before leaving Vestmannasund, we pass some houses to our left, the abandoned village of Slættanes. The last villagers left in 1965 due to the isolated location of the village, the only way to get there is by boat or hiking. 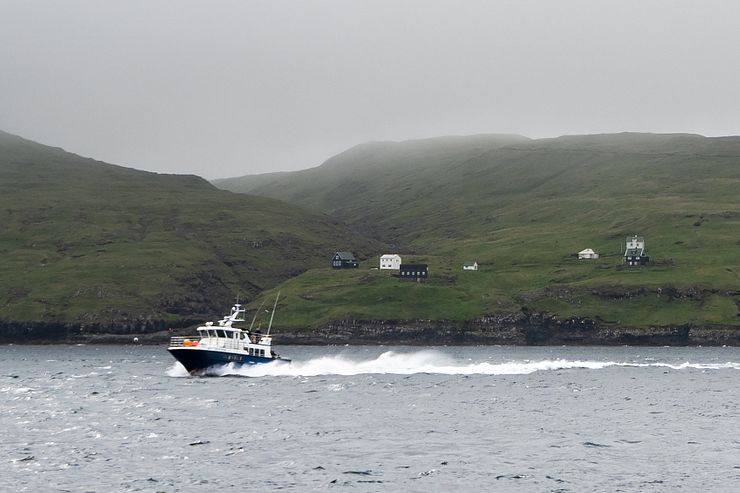 The abandoned village of Slættanes.

Where there is grass in the Faroe Islands, there are sheep. It does not matter how steep the cliffs are, if there is a green patch, a sheep will be there chewing on the grass. It’s difficult to see them in the photo below, but they are there. 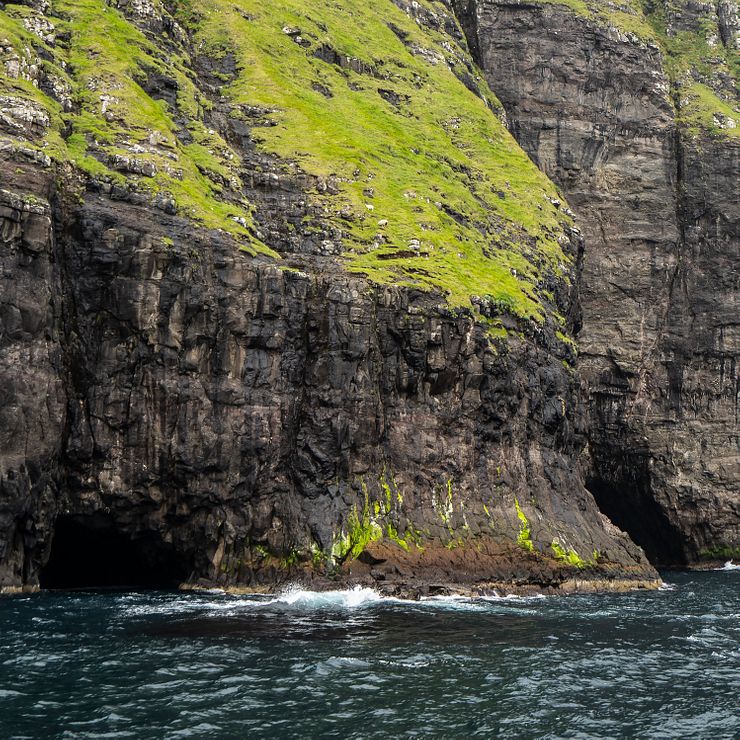 Sheep on the cliff doing their thing.

The captain skilfully navigates the boat through narrow straits, into grottoes and under stone arches. It feels like we almost can touch the cliffs. 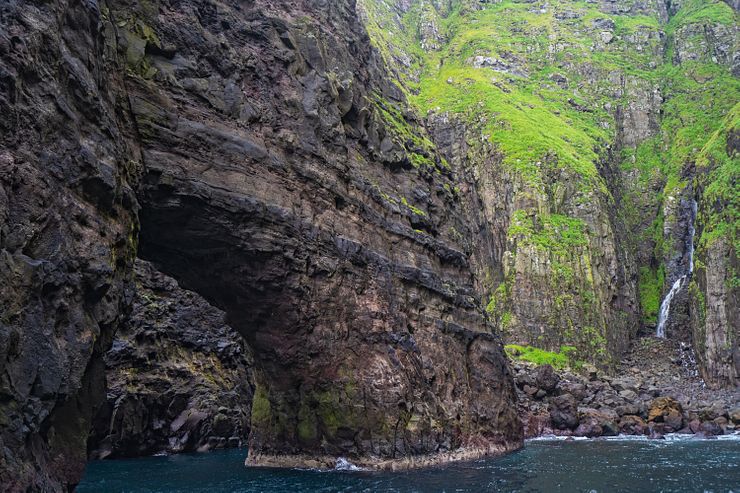 Going through one of the arches.

When coming this close to the cliffs we can see they are not all gray and dull, some are colorful. 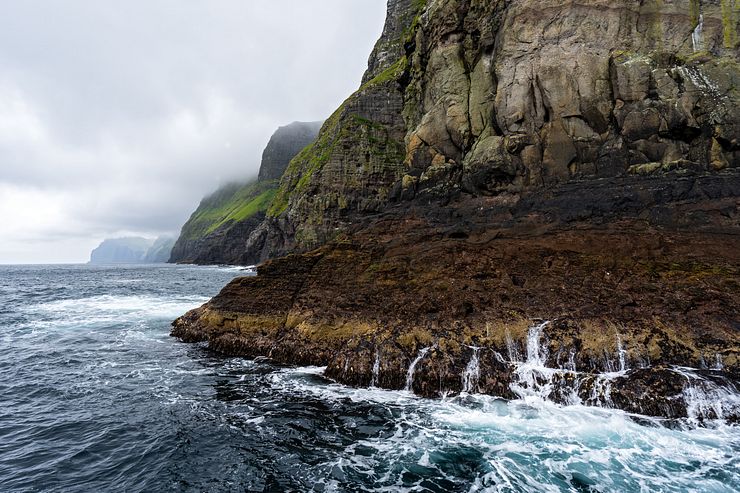 A cliff in shifting colors.

Suddenly an elephant appears in the water. Or maybe mammoth is a better word for this giant?

We are now approaching the second stretch of cliffs at Vestmannabjørgini, these appear to be higher than the ones we saw earlier. The highest cliffs are close to 450m (1500ft) and they are towering over us. 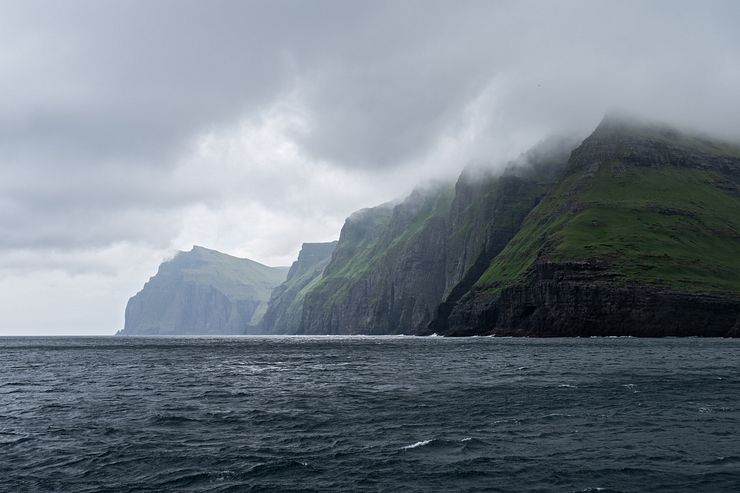 The scale of the cliffs here is grand and there is also a cluster of sea stacks in front of them. 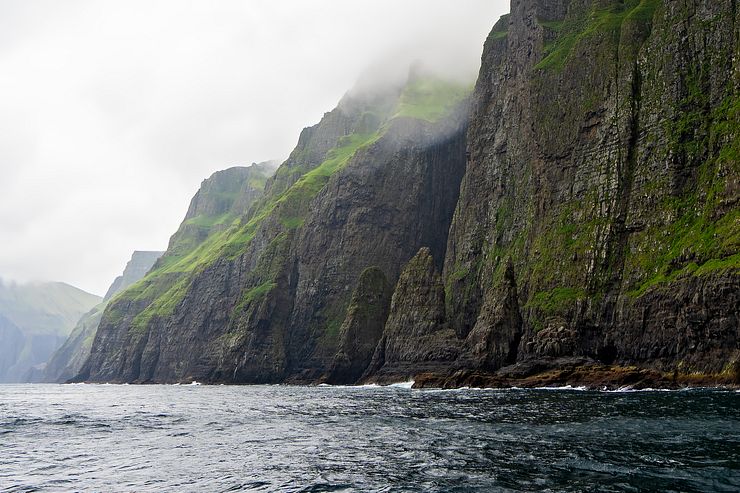 The boat passes behind one of the sea stacks which has a gate-like opening in the middle. This is as far as the tour goes and it is time to head back to Vestmanna. 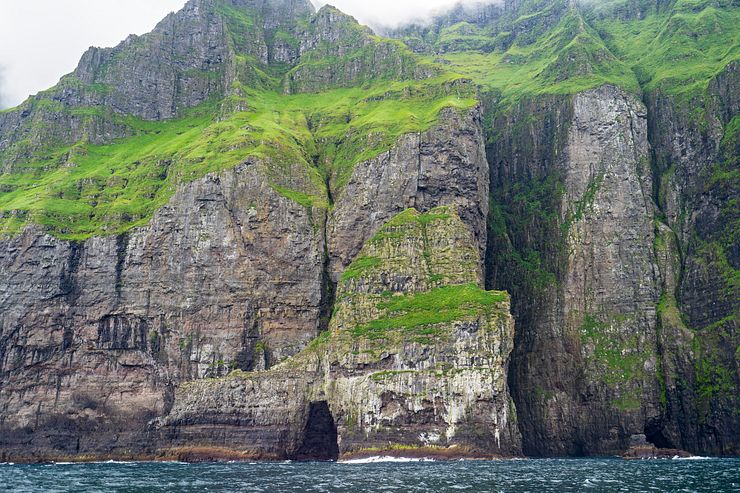 A gate in the rock.

The captain increases the speed and we get a lot of fresh air on the way back. Overall we had a great couple of hours on this tour and we leave Vestmanna one experience richer.