Standing on the Hvíthamar mountain ridge, you have a panoramic view of the Funningur fjord. It's a short hike to the ridge from the road between Funningur and Gjógv.

Funningur on northern Eysturoy has one of the most memorable locations of the villages in the Faroe Islands. It lies at the bottom of a valley, surrounded by mountains in all directions except to the east, where the village looks out over the fjord Funningsfjørður.

Three scenic roads connecting the villages of Eiði, Funningur, Gjógv and Elduvík intersect on the mountainside west of Funningur. The view of Funningur from the mountain road is great and tourists make a photo stop here on their way to Gjógv.

What many don’t know is that it’s easy to hike up to the ridge of the Hvíthamar mountain north of Funningur to get a terrific view of the fjord. 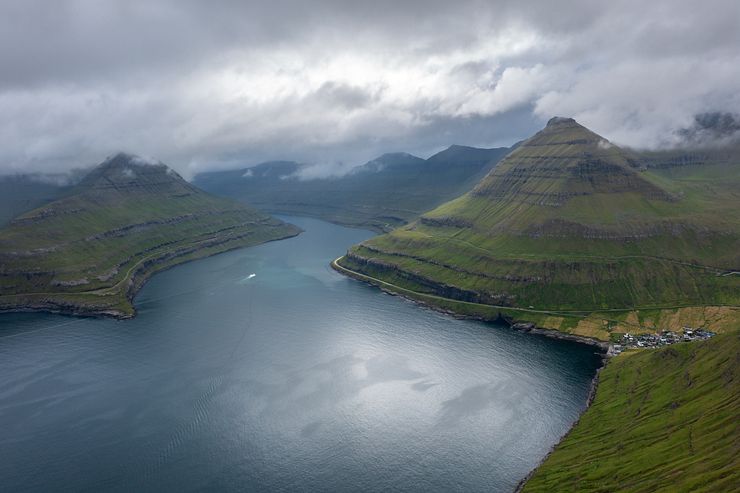 Unless you know about the spot beforehand, you will probably drive by and miss it. There are no signs alerting passersby that there is something to see here. At least it wasn’t the case when I visited in August 2019.

The spot has become popular recently, so maybe they have put something up by now. Anyway, it’s easy to find your way to the ridge even without signs or a marked trail.

How to get to Funningur and the Hvíthamar mountain ridge

The best way to approach Funningur is from the west, driving the beautiful Um Eiðisskarð road between Eiði and Funningur. From Eiði, the road climbs steadily upwards on its way east across the peninsula.

It reaches the highest point at the Eiðisskarð mountain pass, which is the best starting point for ascending the Slættaratindur summit (880m/2890ft), the highest peak in the Faroe Islands. 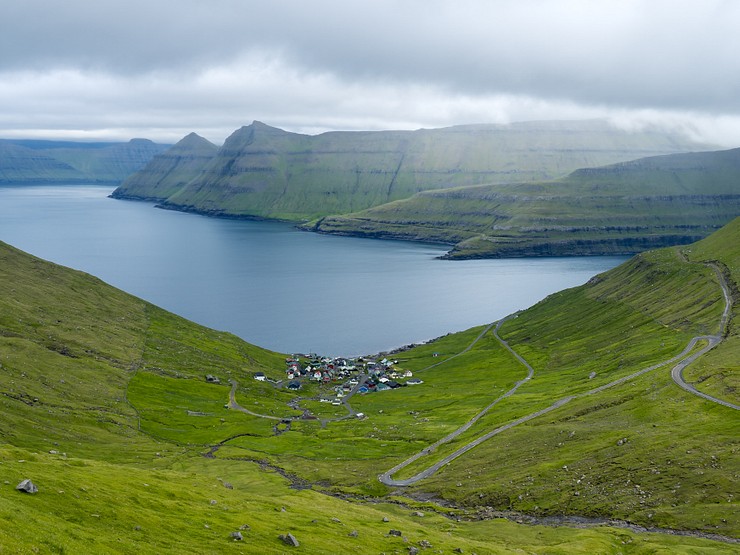 Funningur - view from the mountain road

Shortly thereafter, you will get the first glimpse of Funningsfjørður. Following a few sharp turns of the road, the landscape opens up with the view of Funningur far below in a bowl-shaped valley. Slættaratindur, now behind you, is an imposing backdrop for the small village when seen from the other side of the fjord.

This is the view Funningur is known for, the narrow road winds back and forth in sharp turns until reaching the village. Going to the Hvíthamar mountain ridge, you shall not drive to Funningur, but continue north towards the village of Gjógv. 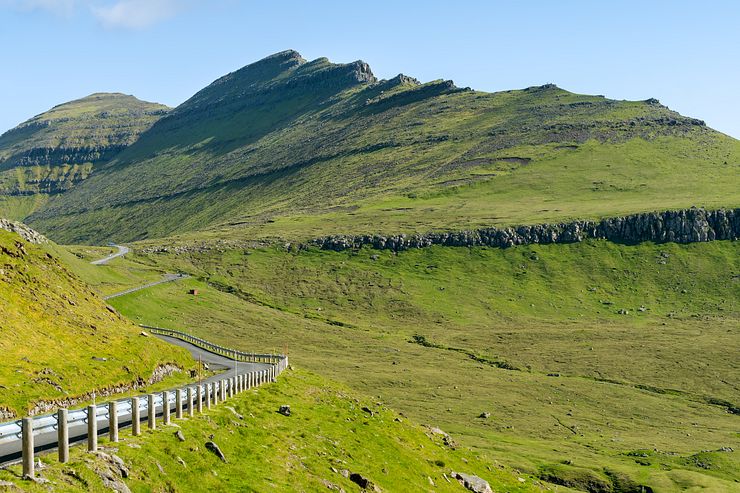 The parking at the start of the Hvíthamar hike is about 1.5km north of the intersection with the road leading down to Funningur. The northbound road, Gjáarleið, makes two sharp turns (the s-shape at the marker on the map below), and after 200m you drive over a cattle guard.

Here is a space at the side of the road where a few cars can park without obstructing the traffic. The parking coordinates are 62.2982, -6.9706.

From the parking, it’s a straight hike up the mountainside to reach the lower part of the Hvíthamar ridge. A cattle fence runs all the way from the parking up to the top. The walk along the left side of the fence takes about 15-20 minutes. 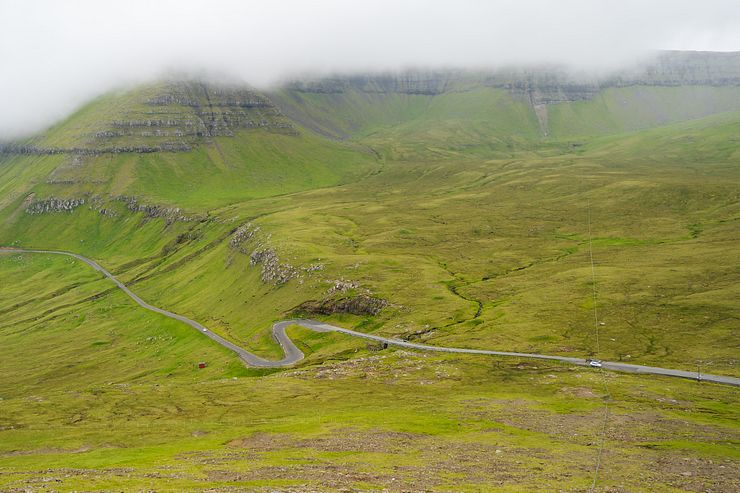 View towards the parking from halfway up Hvíthamar

The view of the fjord is best from the top, but Funningur is not visible from the ridge. If you want to see the village from Hvíthamar, don’t walk up the mountain. Instead, turn right and climb over the fence using a ladder next to the parking.

I didn’t go to the village viewpoint myself, but I think it’s possible to make a detour and go there on the way down from the ridge instead of walking back to the car the same way. The southern side of the mountain isn’t steep.

After the strengthening walk up to the top, it’s time to explore the Hvíthamar ridge. In clear weather, you have an amazing view of Funningsfjørður as it meanders south towards the center of Eysturoy.

Two mountains guard the entrance to the narrower passage of the fjord. To the right stands Húsafjall (695m/2280ft) and to the left rises the slightly higher Dalkinsfjall (719m/2359ft). Funningur is hiding in the valley at the foot of Húsafjall. 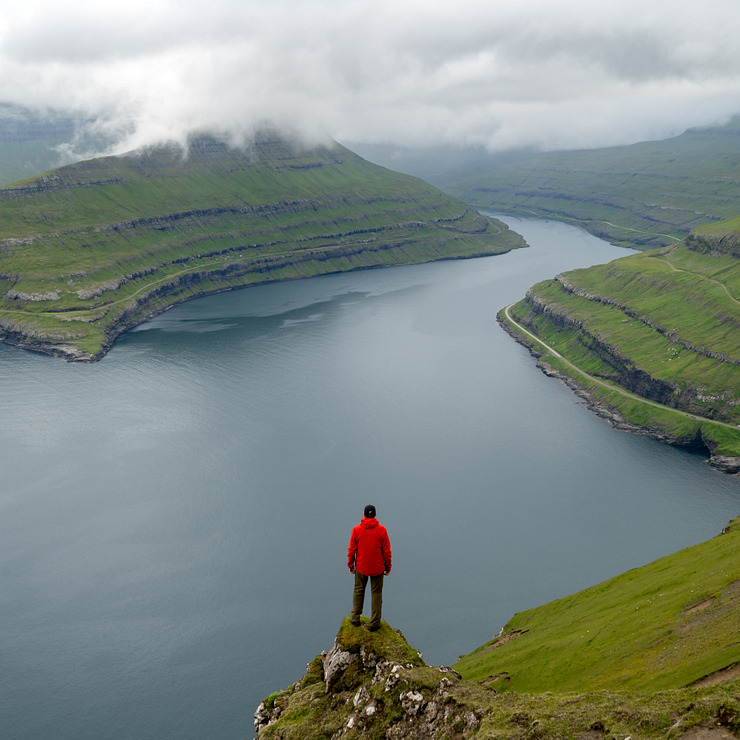 I had no luck with the weather, and despite spending quite some time on the mountain waiting for the clouds to clear, it didn’t happen. Even with the low clouds, the view was superb and worth the time and effort to hike Hvíthamar.

To get different perspectives, you can walk the ridge both south towards the village and north to the higher parts, which have the slightly better view in my opinion.

Judging from Instagram posts, the most popular photo spot is south of the point where you enter the ridge. There are a couple of stones on which you can stand and look out over the fjord to get an eye-catching photo when taken from the right angle. 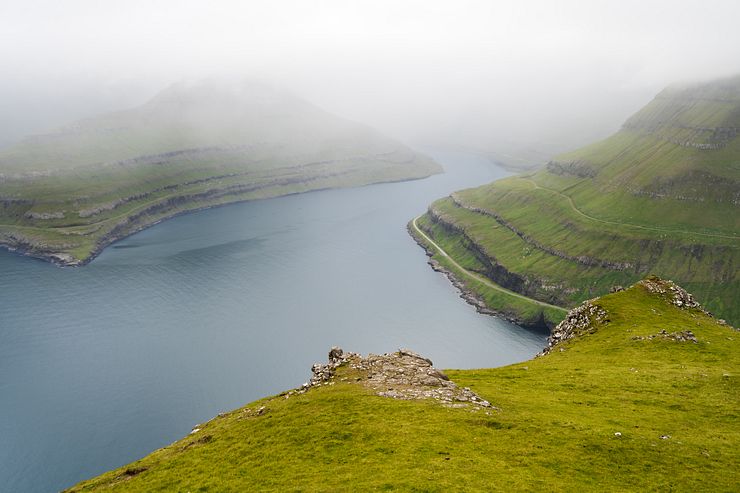 Popular photo spot on Hvíthamar - but not on this day

I didn’t have a clear view of the fjord and walked further north instead. The ridge is like a flight of stairs with a series of plateaus forming the steps. To reach the next plateau, you must walk on the mountainside just below the ridge.

Follow a narrow path on the side facing the valley. Down to your left, you see the parking and the road to Gjógv running north through the valley. 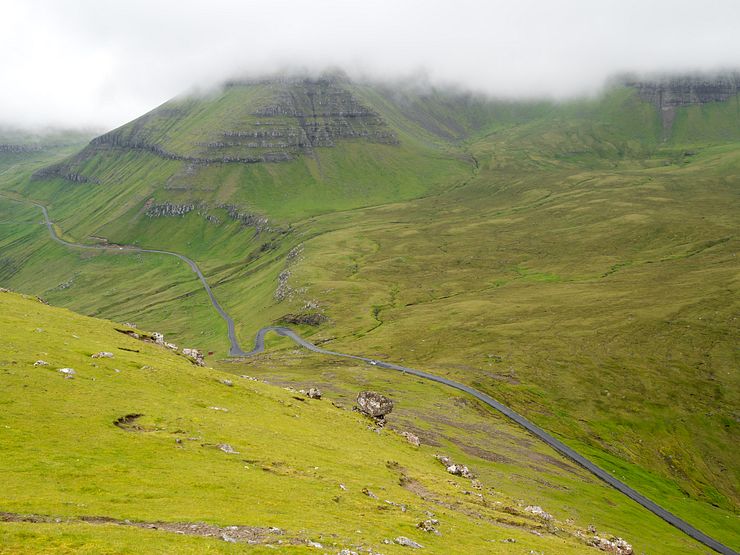 You don’t have to walk that far until the right side of the path changes from a rock wall to easier terrain where you can walk up to the next ridge plateau.

There are several good photo spots along this part of the ridge. Straight to the east, across the fjord from Funningur, is the village of Elduvík. Further to east, beyond Funningsfjørður, is the long and narrow island of Kalsoy with one of the top sights in the Faroe Islands, the Kallur lighthouse.

If it’s still there, you will have a nice bird’s-eye view of a fish farm down at the fjord, a common sight in the Faroe Islands. 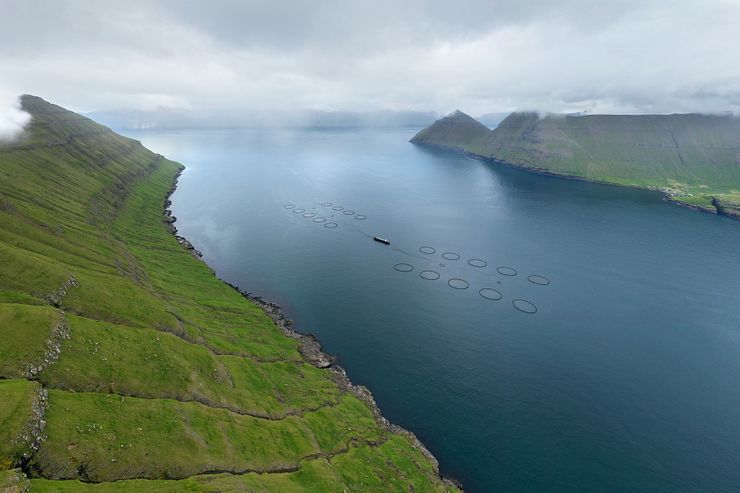 Drone panorama of Funningsfjørður - view to the east

The whole activity, including walking up and down plus spending time at the ridge, takes 1-1.5h. Or even less if you only take a quick look at the view and snap some photos.

From the parking at Hvíthamar, it’s a five minute drive north to visit Gjógv. The village is named after a 200m long gorge running from the sea into a protected natural harbor. You can do a short hike up the hillside north of town to get a nice view of the surroundings.

The land is private property and the landowner charges 50 DKK for the hike (August 2019). Pay by putting cash in a box at the start of the walk. 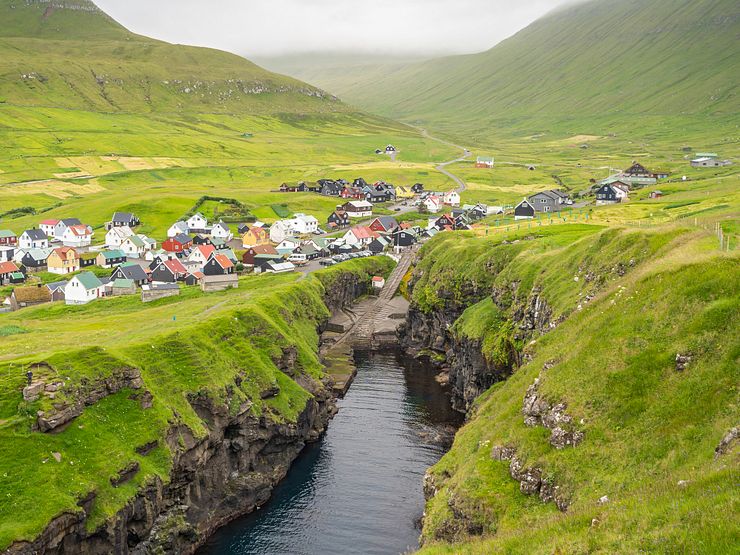 The gorge at the village of Gjógv.

Gjógv is at the end of the road, so after spending time in the village you must drive back south on the same road until reaching the intersection with the road leading down to Funningur. If the weather is clear, it might be a good time for a hike to the peak of Slættaratindur.

I have done the hike (from Eiðisskarð), but I can unfortunately not tell you anything about the view, because I didn’t see it. It was cloudy, and I saw nothing from the top. I’ve heard that it can be great on a clear day.

"Tourists routes in the Faroe Islands are called Sóljuleiðir (Buttercup routes), named after the Faroese national flower. On tourist routes you can drive slowly and enjoy the trip and the stunning surrounding nature without disturbing the traffic on the main roads."

If you drive down to Funningur for a quick stop in the small village, you can continue to drive around Funningsfjørður on the two scenic buttercup routes Funningsleið and Elduvíkarleið. From the eastern side of the fjord, you will see Funningur below Slættaratindur. 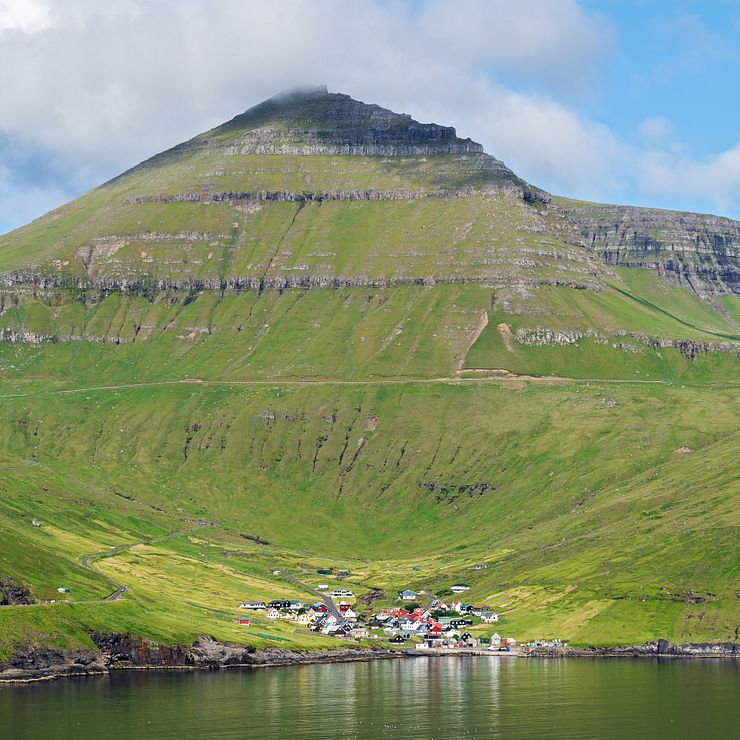 Hvíthamar is not visible in the photo above, but the mountain is to the right of Funningur. Driving Elduvíkarleið all the way to the end brings your to Elduvík. It takes about 15-20 minutes to drive from Funningur to Elduvík one-way.