Once named Torpedowaffenplatz Hexengrund, now nicknamed Torpedownia. This remnant of World War II stands in the Bay of Gdańsk just off the coast near Gdynia.

Torpedownia is an abandoned torpedo testing station dating back to the time of World War II. As a reminder of the region’s dark history, it stands in the water just off the Polish Baltic Sea coast near Gdynia. 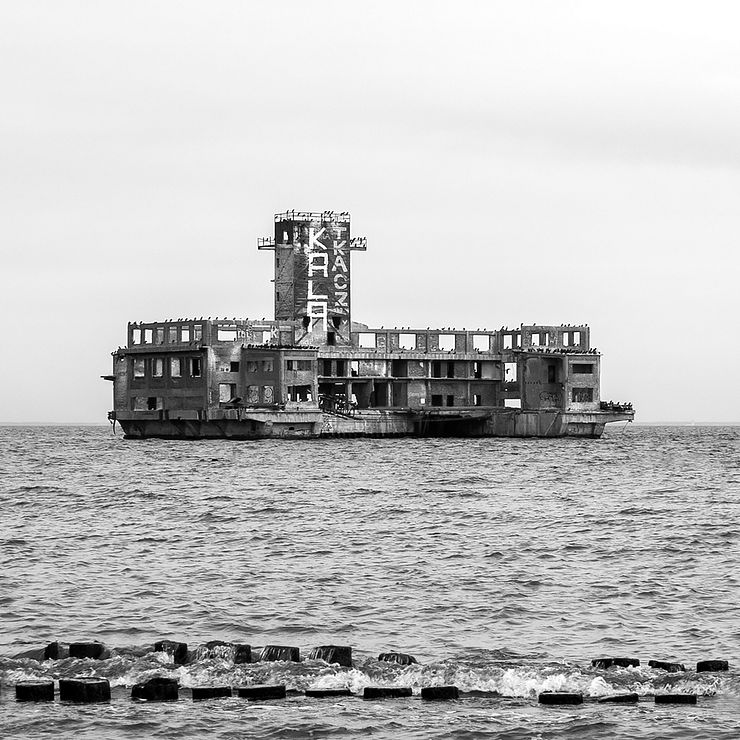 If you are visiting the Tricity (Gdańsk - Gdynia - Sopot) and you want to see something different after ticking off the old towns and museums, then Torpedownia might be for you. Sure, it’s just an old concrete building and you will not even come close to it, but it’s still fascinating. The eerie manifestation of this odd war relic makes you think and reflect on what happened here in the past.

There is no shortage of historical World War II sites in Poland, they are all over the country. Torpedownia isn’t one of the most significant or well-known sites, but it’s something you will not see in many other places. If you are interested in war history, it should be on your list.

Construction of the facility started in 1940. The Nazis called it Torpedowaffenplatz Hexengrund and the Poles later nicknamed it Torpedownia. It was in operation for three years, from 1942 until 1945 when the Soviet Army seized control of it. The Soviets continued to use the main building for military training after the war. 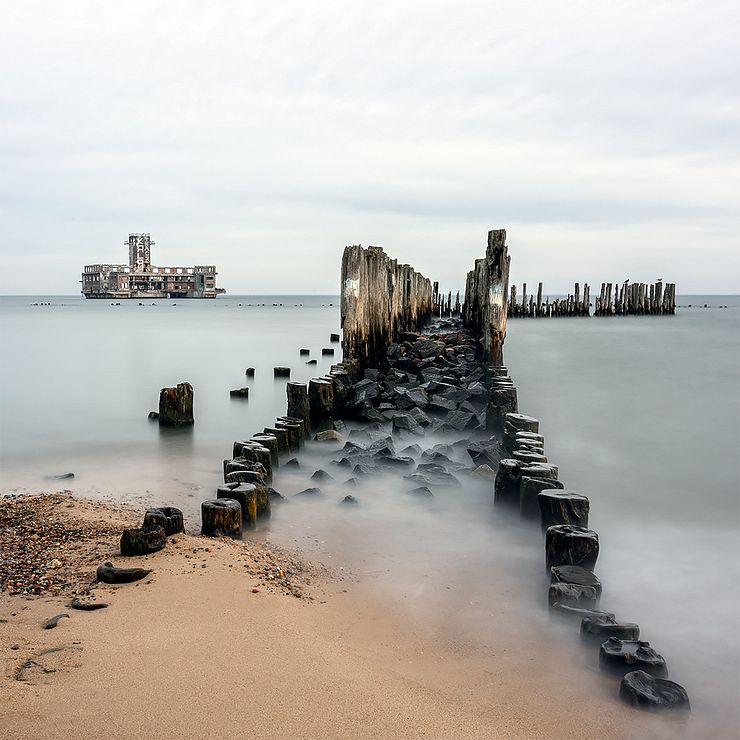 Torpedownia and the demolished pier.

Luftwaffe conducted aerial torpedo testing at Torpedownia. Aircrafts drop aerial torpedoes into the sea and once in the water, the torpedo propels itself towards the target. The torpedo type was common in World War II.

During the first years of the war, the Germans relied on buying torpedoes from Italy and Japan. In 1942, Hitler prioritized production of a German aerial torpedo and put Luftwaffe in charge of the project. Torpedowaffenplatz Hexengrund played an important part in testing and improving new torpedo designs.

A pier connected the main building with the shore, but it was demolished for safety reasons. I don’t know when that happened, but it might have been as late as in the 1990s. The remains of the pier are still there today and makes a nice foreground in photos of Torpedownia.

Also part of the complex were two smaller buildings placed further out in the bay. A net mounted between the two buildings captured the launched torpedoes during tests.

Today, almost 80 years after its completion, Torpedownia still stands firm in the Bay of Puck, the western part of the Bay of Gdańsk. Time has taken its toll and only the concrete skeleton remains.

The building is about 3-400m from the shore and visible from the beach. I wish I had brought binoculars to see the details better though. The beach looks decent so in the warmer months you can combine war history sightseeing with some beach time.

If you want to take a closer look at the building, I think there are kayaks for rent during summer. I haven’t tried it myself so I cannot vouch for any company renting kayaks or arranging Torpedownia tours. Here is one company to contact if you are interested. 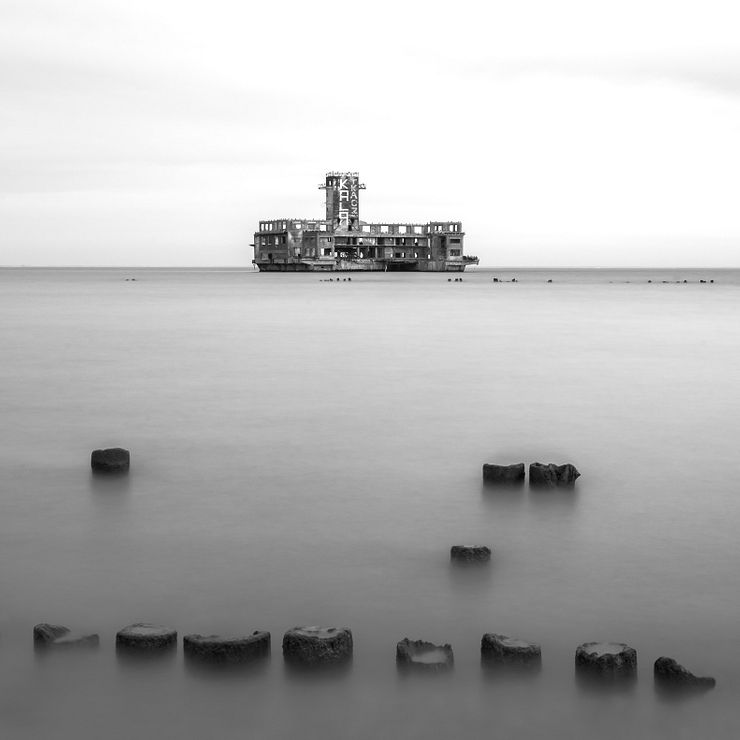 Torpedownia and remains of the pier.

We visited on a windy day in November and the beach was almost empty except for some people walking their dogs. It was cold, but considering the nature of the site, the gloomy day was perfect for visiting Torpedownia.

How to get to Torpedownia

Torpedownia is around 10km north of central Gdynia in the Babie Doły (formerly Hexengrund) district. It’s easiest to come here with a car, but there are also buses from Gdynia taking you close to the beach. Search for destination Babie Doły or Babie Doły Plaza to find a bus connection.

It’s close to Gdynia so I don’t think a taxi or an Uber cost much either. We drove to the beach and parked the car at Babie Doły Plaza (coordinates 54.585321, 18.537911). There is a military facility close to the beach, you pass it on the way to the parking. They have a retractable road barrier so it’s possible the road is occasionally closed. If it is, park the car somewhere in the area and walk down to the beach instead.

Flying a drone over Torpedownia?

I brought my new drone to Torpedownia thinking it would be the perfect place to fly it. Aside from being a cool video, it would also give a closer look at the building, revealing details hard to see from the beach.

I ended up not flying the drone at all. It was windy, but the main reason was the military airfield just next to the beach. Air traffic and military zones are something you don’t want nearby when flying drones so I bailed out. I try to follow local drone regulations when traveling and I didn’t feel like dealing with the Polish military.

There are several aerial videos of Torpedownia on YouTube, the locals don’t seem to be concerned about the military installations.

While researching the history of Torpedownia I found out that the Germans built another torpedo testing station close to the wartime port Oksywie (Oxhöft in German, coordinates 54.548508, 18.566449). Torpedo Versuchsanstalt Oxhöft was in use before the twin in Hexengrund. Kriegsmarine, the Nazi navy, ran the facility.

The Germans developed several types of torpedoes in Oksywie, among them advanced models with homing systems based on acoustics and magnetism. The two Torpedownias are only 4-5km apart and during the war the Kashubian Express railway connected the two sites. 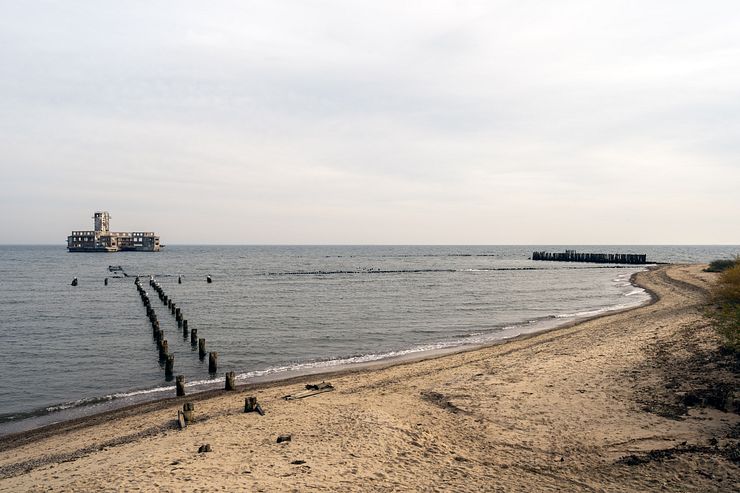 The Polish special forces navy command Formoza has a base at Oksywie so locals call it Torpedownia Formoza. We didn’t know about the existence of the twin Torpedownia when visiting Gdynia, otherwise we would have tried to see both. Formoza is an active military installation, and it’s probably difficult to get a close look at it, but I will check it out the next time I am in Gdynia.

Visiting Torpedownia as a day trip from Gdańsk

You can visit Torpedownia as a day trip from Gdańsk. With a car, it’s an easy 40min drive to Gdynia on the E28 highway. On the way back I suggest taking the smaller coastal road and make a stop in Sopot to walk on the famous wooden pier (they charge a fee in the summer). Another recommended stop on the way is the cathedral in Oliwa with its characteristic slim towers. 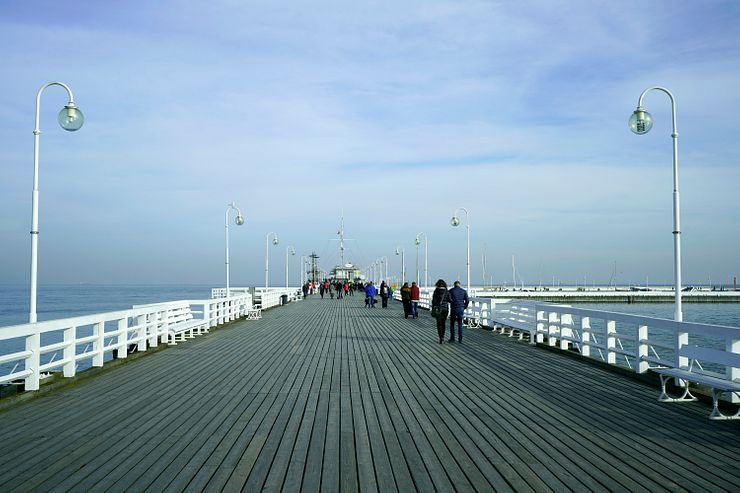 The pier in Sopot.

Unfortunately we didn’t have time to explore Gdynia, so we saved the city for another trip.

Without a car, you can do this day trip by train and bus/taxi. The communications between the three cities Gdańsk, Sopot and Gdynia are excellent with train departures throughout the whole day. See the SKM website for timetables and tickets. 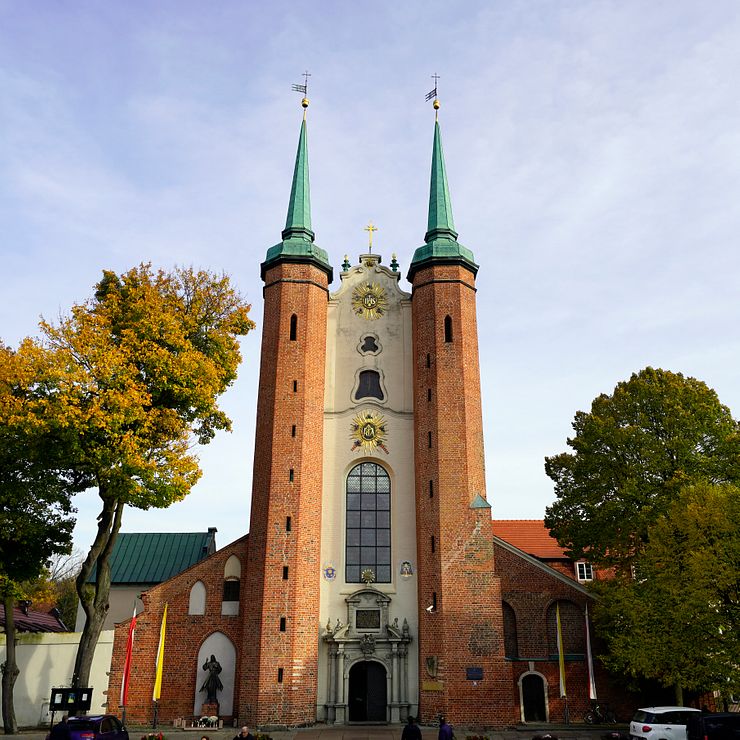