Road D707 in southern Namibia is one of the most beautiful drives in the country. It passes through a vivid landscape on the route between Sesriem and Aus.

Back in May 2019, we did a two week long road trip in Namibia. The itinerary spanned from Fish River Canyon in the south to Etosha National Park in the north. With a total driving distance of almost 4,700km (2,920 miles), we saw a lot of dusty gravel roads and incredible nature. 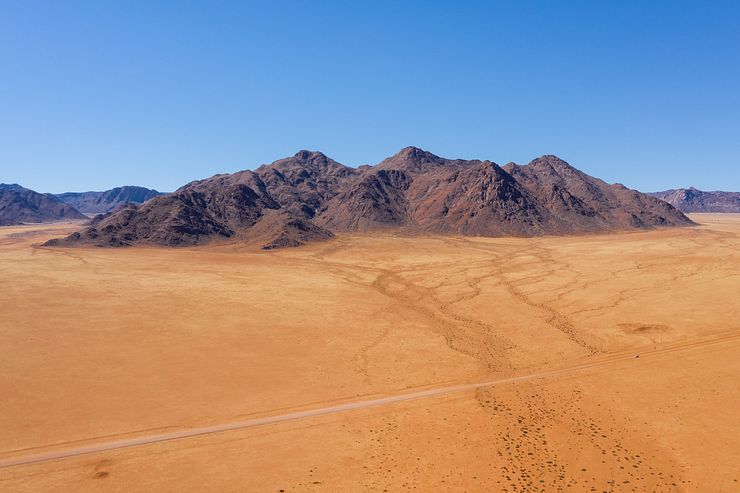 I would describe the Namibian landscape as a mixed bag. Don’t get me wrong, when it’s good, it’s awesome. Yet, you spend quite some time driving through flat, monotone terrain dominated by toned-down colors under a scorching sun.

Then suddenly it changes.

Out with the boring grayish brown surroundings, in with vivid colors and enchanting vistas. Add a sunrise or sunset to that, and the landscape is glowing. 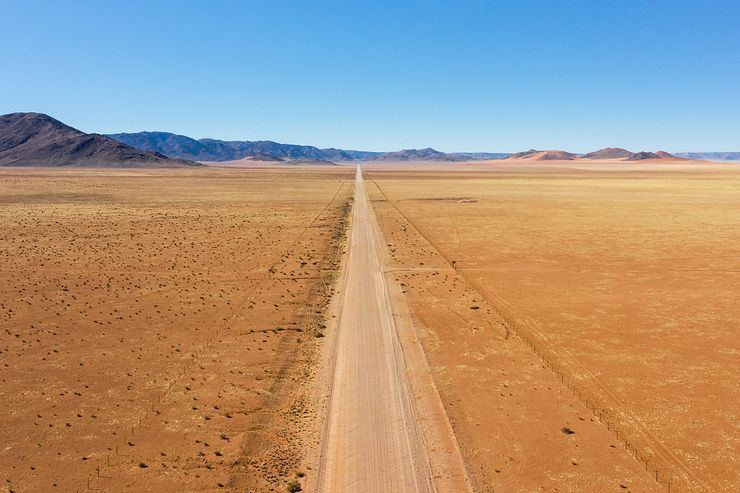 Driving into the horizon on road D707.

The star of all the roads on our route was the D707, an anonymous back road in southern Namibia. The road cuts through a colorful landscape with orange sand and yellow grass contrasted by dark mountains and a clear blue sky. It’s a feast for the eyes.

Some locals recommended us to drive the D707. They claimed it’s one of the most beautiful roads in Namibia. From our experience of all the roads we saw, I’m inclined to agree.

I don’t know how the landscape shifts with the seasons, but at least in the middle of May, the drive was gorgeous. 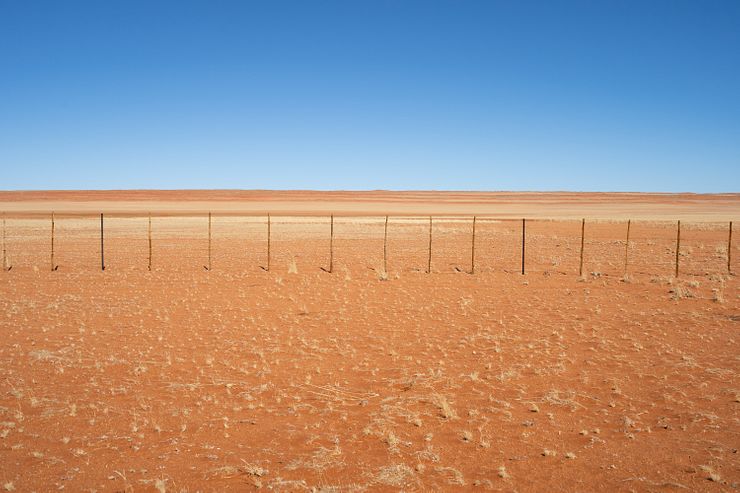 The D707 branches off to the west from the C13 between Aus and Helmeringhausen in southwestern Namibia. It runs in a bend towards the north for 120km (75 miles) until it joins with the C27 around 160km (100 miles) south of Sesriem.

According to Google Maps, it takes around 2h to drive the D707 with an average speed of about 60 km/h (37 mph). It’s possible to cover the distance in 2h if you are short on time, but for a stressless experience you should plan for 3—4h. 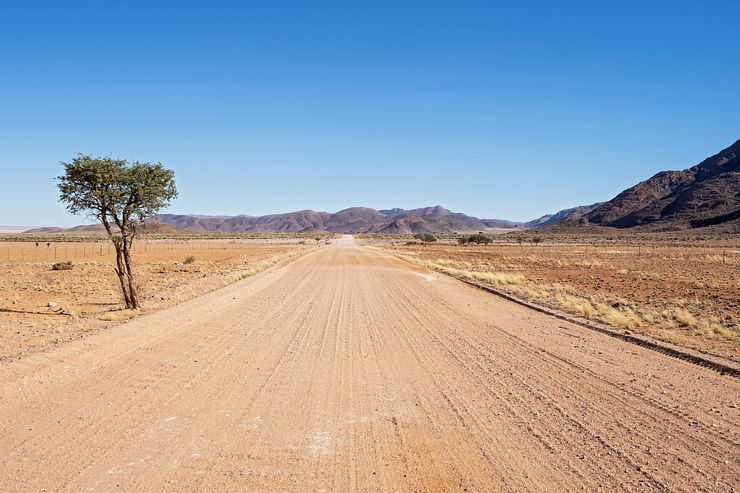 We spent 3.5h on the road, including two stops to fly our drone and several quick photo stops. I could have lingered another hour to get better photos, but we had to make an early start the following morning and didn’t want to arrive too late to our destination. 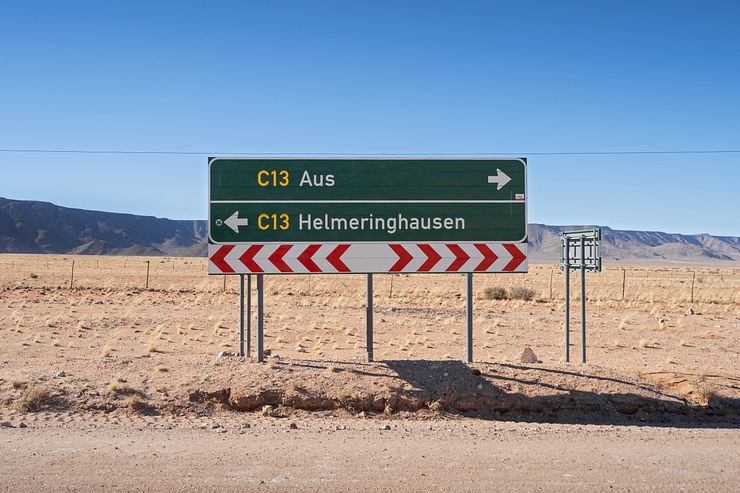 Check out this video on the Road Tripster YouTube channel with snippets from our drive on the D707. The video shows some highlights and most of the footage is from the southern half of the road.

So why should you drive the D707? The road is a bit out of the way from the most popular self-drive route (Windhoek — Sesriem/Sossusvlei — Etosha — Windhoek). It’s some 3—4h south of Sesriem.

If you include the south of Namibia in your itinerary, the D707 is like the icing on the cake. It’s not worth making the detour only because of the D707, but it makes the drive between Sesriem and Aus/Lüderitz an experience instead of just transport. 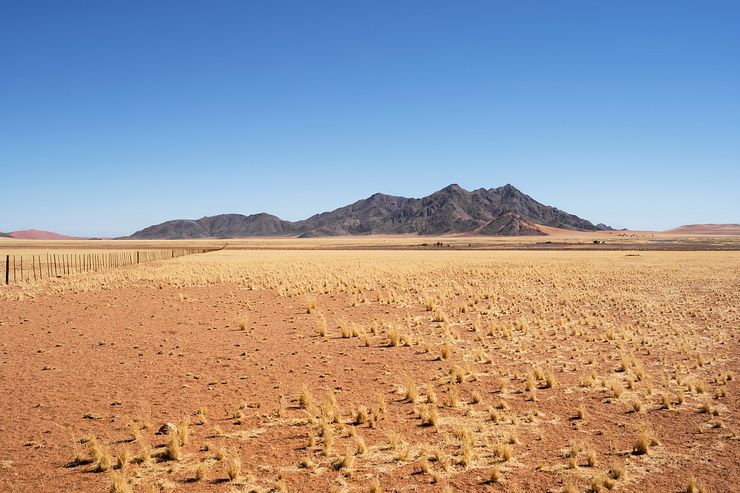 Mountains in a distance.

The D707 is categorized as a district, or secondary, road in the Namibian road network. It’s an unpaved road, which makes it difficult to say anything definitive about the road quality. The surfaces of these smaller roads are affected by the weather, the amount of traffic, and the maintenance frequency.

Check with someone at your accommodation for up-to-date information if you feel unsure about the current road condition.

Your other option is to take the less inspiring C13/C27 instead of the D707. The driving distance is about the same, but the C-roads will be faster because you will not make so many stops to admire the landscape. 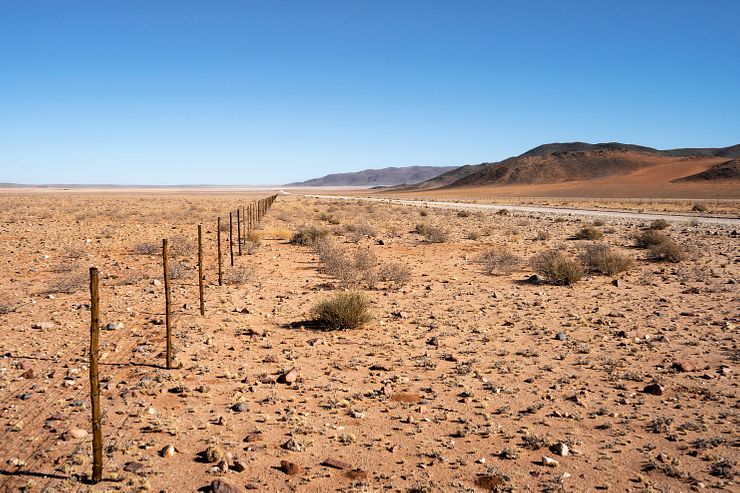 When we drove the road in 2019, it was in good condition. We expected the road to be narrow and rough, but it wasn’t. In fact, it was much better than the C27, which was tiring to drive south of Sesriem, where it sees a lot of traffic.

One notable section on the D707 was about half-way through where the road was sandy for about 1km. With a large 4WD SUV, it was no problem to drive through the sand, but it was slippery. Driving a lower-clearance 2WD vehicle, one must be careful on that section if the sand is still there.

The road surface at both ends of the road is gravel. To the south, the gravel surface was fine and easy to drive on. The last 30km at the northern end was corrugated, had some potholes and larger stones than in the south. 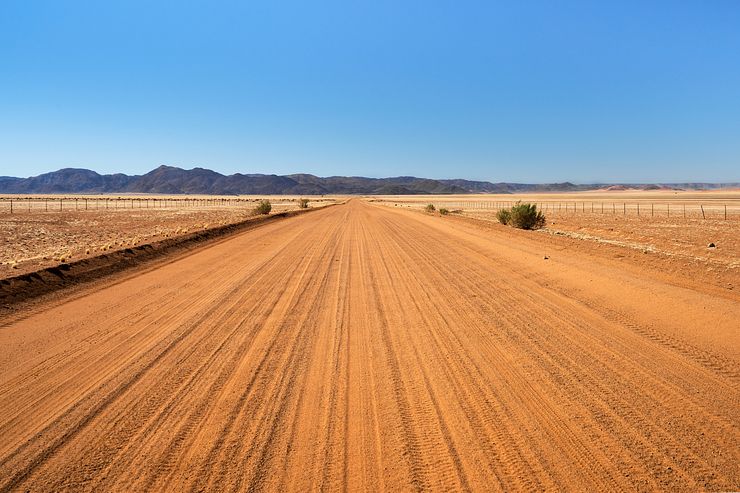 Most of the D707 is what I would call an earth or dirt road. The orange colored surface was smooth, easily the best section of the road.

We didn’t see many animals during the day, but we passed two small flocks of ostriches. I was too lazy to change to a tele lens on the camera, so I don’t have any photos of the ostriches worth showing in the post.

Remember to bring a good pair of binoculars to Namibia, it makes wildlife spotting so much more fun.

We also saw so three wild dogs, black-backed jackals, close to the road.

From south to north on the D707 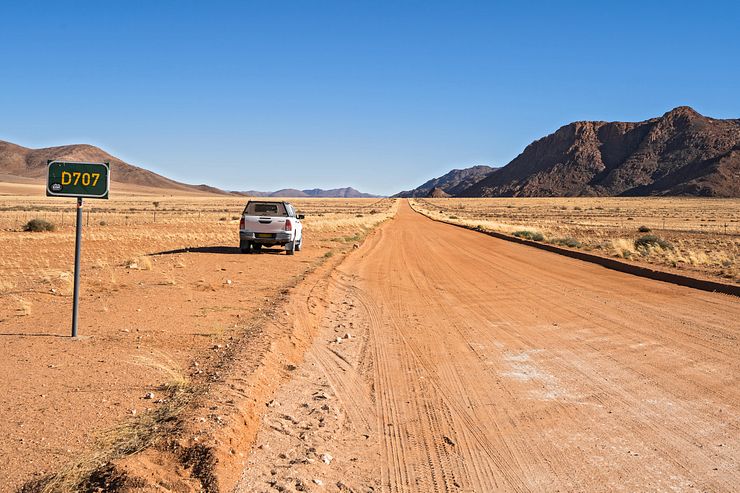 The start of the road in the south.

The first half of the road is the most beautiful with yellow grass, orange sand and mountains rising from the plain like islands in a colored sea. 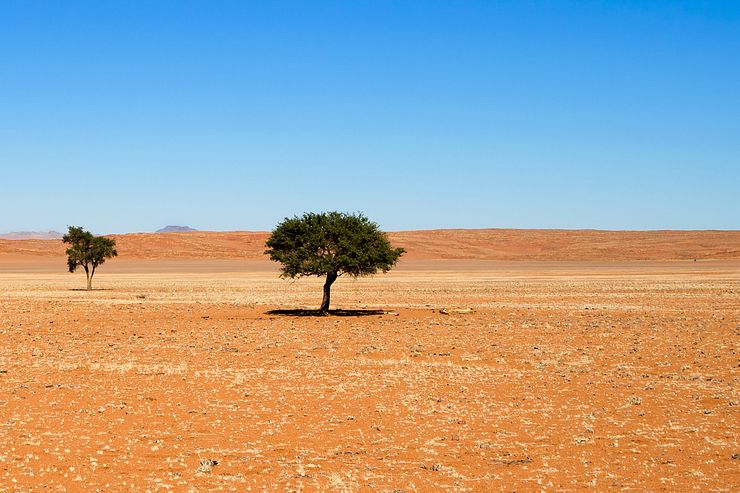 Small trees on the plain.

There are no particular sights along the road, but there are still plenty of photo opportunities. The landscape is spectacular from the air; bring your drone! 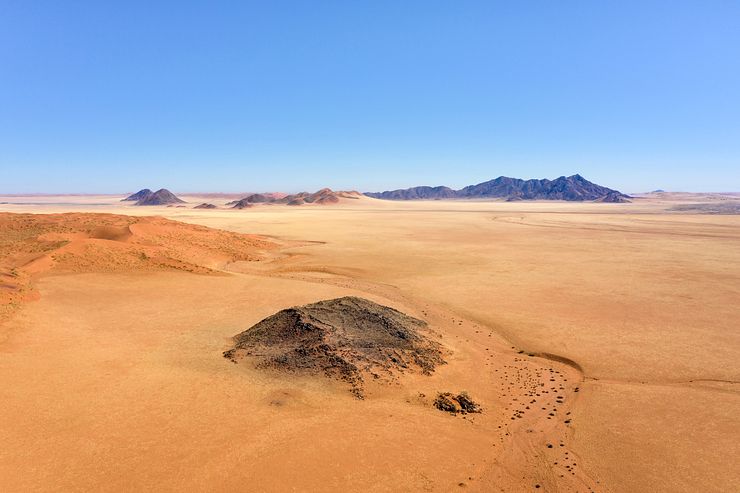 Drone view of the colorful desert.

After a while, trees appear on both sides of the road. It’s not like a forest or anything, but the trees are a nice addition to the landscape. Some of them have succumbed to the heat and stand like petrified reminders of the harsh environment. 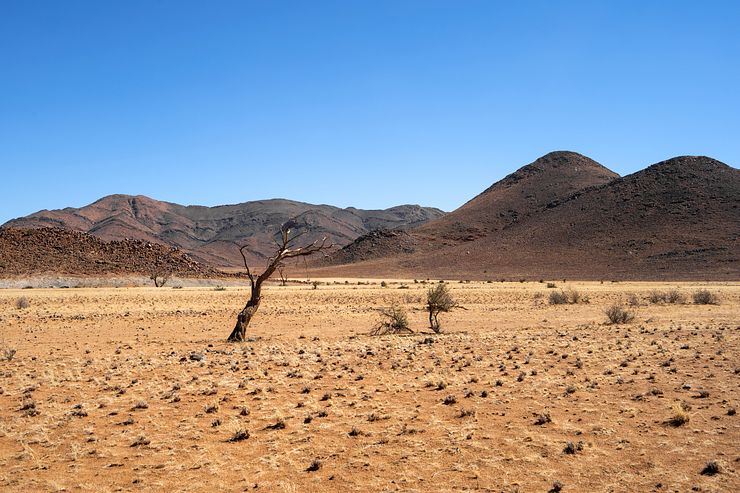 With about 30km left of the road, the landscape changes. It’s not as vivid as before and the mountains, now much closer to the road, are blocking the view. This part is not as beautiful as further south.

Towards the end, maybe the last 5—6km, the colors return. We leave the D707 after making a last stop to enjoy the view over a vast, sandy plain with rust-colored mountains in the distance. 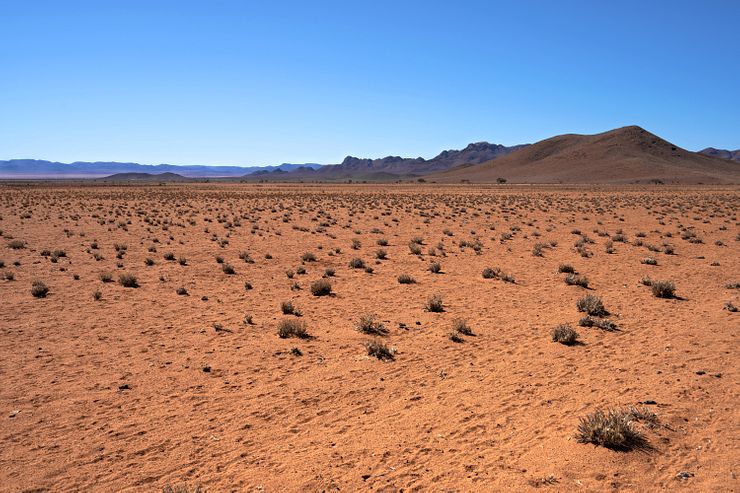 Near the end of the road in the north.

Places to visit in southern Namibia

Lüderitz is a good base for visiting the nearby ghost town of Kolmanskop. The residents abandoned the former mining village in 1956, but the sand-filled houses are well preserved in the dry desert climate.

Another popular activity in Lüderitz is to join a boat tour to Halifax Island. The small and rocky island is home to a colony of the northernmost living African penguins. Note that it’s not allowed to go ashore on the island.

If you are lucky, dolphins will come close to the boat and swim and jump in the water. You can do the boat tour in the early morning and still have time to visit Kolmanskop after returning to Lüderitz.

The landscape around the small town of Aus is beautiful, and it is a good overnight stop when driving to or from Sesriem. Fish River Canyon is a 5h drive on good roads from Lüderitz. The canyon is one of the world’s largest, and while it’s not as colorful as Grand Canyon, it’s still a mighty sight.