The Azadi Tower is the western gateway of Tehran and the city's most iconic landmark. With an architecture combining modern and traditional styles, it's an impressing monument.

The Azadi Tower (Freedom Tower) is a tribute to the 2500th anniversary of the Persian Empire. It is the most iconic landmark of the Iranian capital Tehran where it stands as the western gateway to the city. If you arrive in Tehran at the Mehrabad International Airport, which despite the name serves domestic flights only, the Azadi Tower welcomes you to the city. 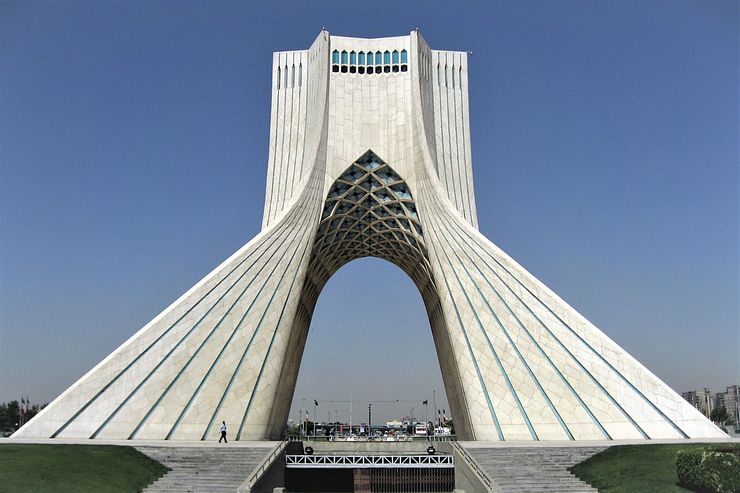 When I visited Tehran on a hot day back in 2012, the first thing I did was to go see the Azadi Tower. I like the architecture of the monument, the symmetric design is clean and elegant, but still powerful. The architectural style is also different from what I am used to as a European. The urban surroundings with intense traffic are uninspiring, so try shut the chaos out while visiting this impressing monument.

History of the Azadi Tower

In 1966, the architect Hossein Amanat won a competition to design a monument for completion in time for the celebration known as The 2,500th anniversary of the founding of the Imperial State of Iran and First Persian Empire by Cyrus the Great. It’s remarkable that the Council of Celeberations trusted Amanat, only 24 years old, with such an important project.

The title Shah was given to the emperors, kings, princes and lords of Iran, also known as Persia. The Persian rulers regarded themselves as Šāhanšāh, King of Kings.

This was before the revolution in Iran and Shah Mohammad Reza Pahlavi ruled the country. The Shah wanted to show Iran as a country with one of the world’s oldest civilizations but also as a modern state under his leadership. He spared no expense on the festivities held at Persepolis (Shiraz) and in Tehran on October 12 - 16, 1971. Royalties and political leaders from all over the world came to Iran for the celebration. It was a feast to remember.

On October 16, the final day of the festivities, the Shah inaugurated Amanat’s creation to commemorate the event. The original name of the tower was Shahyad Tower (Borj-e Ŝahyād, King’s Memorial Tower) in honor of the Shah. 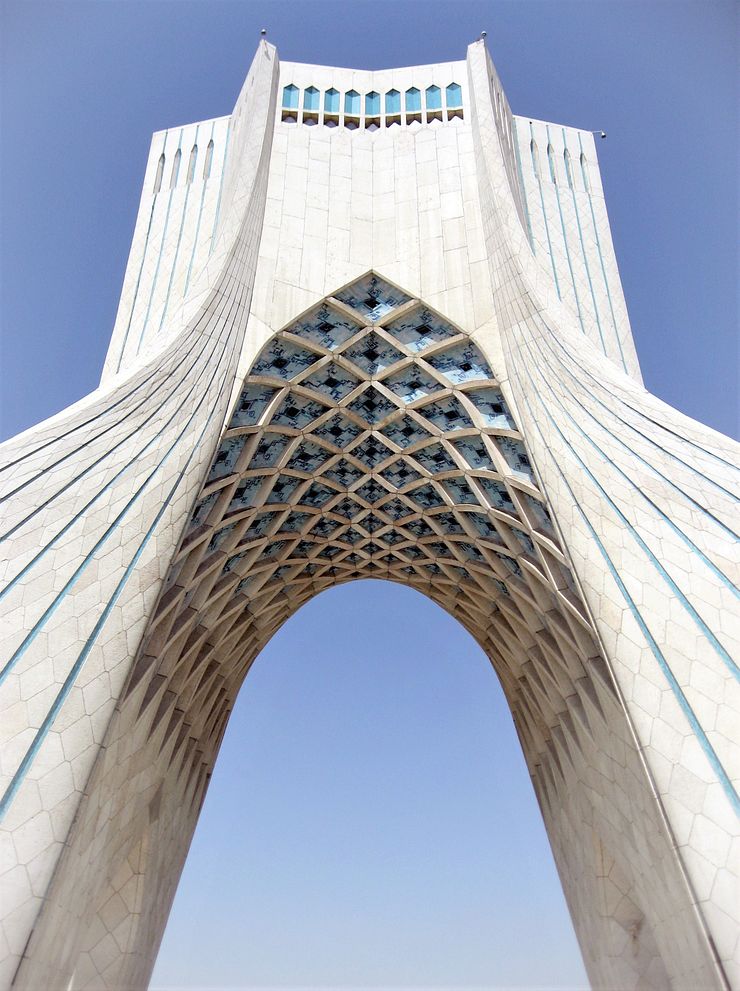 Some historians claim the extravagant celebration was a contributing factor to start a series of events leading to the Iranian Revolution in 1979. I don’t know if that’s correct or not, but the revolution ended a 2,500 years long period of Persian monarchy. Iran turned into an Islamic Republic under leadership of Grand Ayatollah Khomeini.

The authorities changed the name of the Shahyad Tower to Azadi Tower (Borj-e Āzādi) meaning Freedom Tower. Amanat had to flee the country after the revolution and moved to Canada.

The tower combines modern and traditional Iranian architecture with the main vault being an arch from the pre-Islamic Sassanid period. A network of ribs connecting the arches represents the connection between classical and post-classical Iran. The tower is clad in 8000 blocks of white marble from Isfahan, cut into different geometrical shapes.

If you are in Tehran, I definitely recommend a visit to the Azadi Tower. It is not old, not that big, the location is not beautiful, but the monument has an aura of mystery making it memorable. Well, at least in my eyes, but I am a sucker for monuments!

The tower is part of the Azadi Cultural Complex also including an underground museum and a concert venue. I didn’t visit the museum because it was closed. The museum has mixed reviews; it is probably nothing special, but why not check it out if you are at the site? The items on display are artifacts like ceramics and glassware from different time periods.

More information is available at the official Azadi Tower page (here is a link to an automatic translation of the page, might be useful if your Farsi is as bad as mine).

The top floor of the tower is an observation deck accessible by elevator or stairs. As I couldn’t get into the tower, I don’t know how the view is, but considering the tower is only around 45m high, it cannot be that spectacular. I would have gone up though had it had been open.

The opening hours below are from the official website. Note that the site is unclear about Saturdays, it both states that the tower is open and that it’s not. I am quite sure it is closed on Saturdays.

These are the opening hours for the museum, the area around the tower is always open so if you only want to look at the monument, you can come whenever you like. I visited in the day, but some like it in the night when the tower is lit. 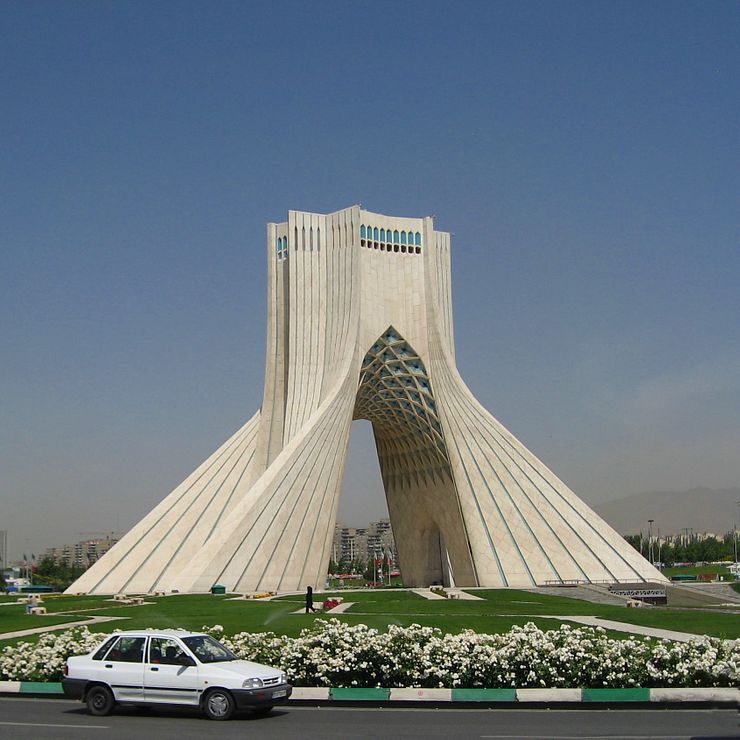 Azadi Tower in the middle of a large roundabout at Azadi Square.

It is easy get to the monument by metro, take line 4 to the Meydan-e Azadi station (Azadi Square). Don’t confuse that station with any other station with Azadi in the name. I am not sure which color the line has; I don’t remember and searching gives unclear results. People are referring to it with all different colors like blue, green and orange. The website of Tehran Urban & Suburban Railway Operation Co uses yellow for line 4 so I would bet on that color. If you locate the Meydan-e Azadi station on the metro map, you should be fine.

After surfacing from the metro station, you see the monument, but before you can admire it from a closer distance, you need to cross a street that can have intense traffic. Many travelers comment on how bad that passage can be and I agree. I tried to pass through the chaos of cars, but they didn’t seem to want to stop for a tourist. 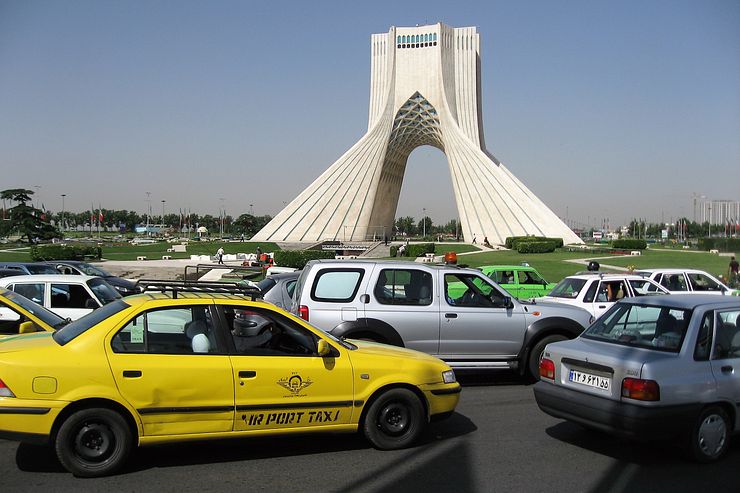 The safest option in these situations is to follow a local who knows how to navigate through the traffic. I was about to do that when I saw passages for pedestrians at each side of the monument. I walked to one of those and there I had no problem to cross the street. I see on Google Maps that there should be a passage also on the western side of the tower. I don’t remember seeing that one in 2012, but maybe it changed since then. 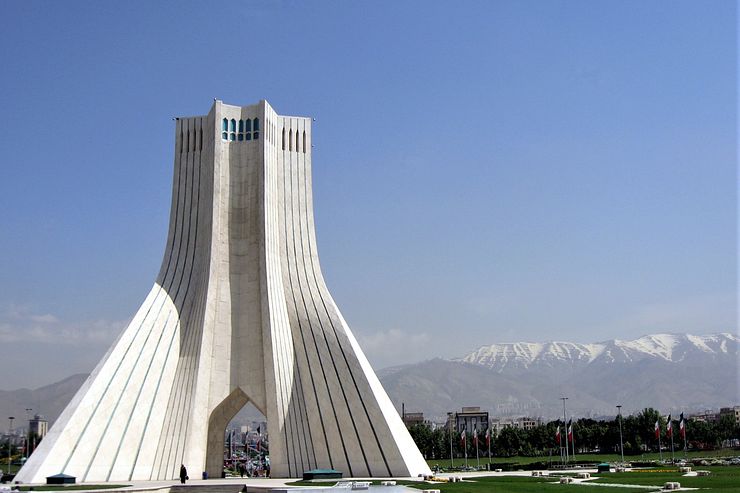 Azadi Tower and the Alborz mountains in the background.

The Martyrs’ Memorial monument in Algiers has an architecture similar to the Azadi Tower. I have not been there yet, but when I travel to Algeria sometime in the future, I will for sure visit the monument.

I am still working on the comments feature and it will be available in a couple of weeks. Contact me if you have a question concerning the content of this page.